Mother Nature has brought the goods, bringing us a fairly active night.  We collected upstream soundings at 12:30 am and 3 am and an east-side sounding at 3 am, and are in the process of prepping and launching the 6 am soundings.  This has the potential to be the best IOP thusfar.

The long loop below shows the development of a band of precipitation near the east shore of the north arm of the lake, which moves downstream and intensifies over Farmington Bay through about 0730 UTC.  Periods of lake-effect banding and convection continue over this area through about 1030 UTC, at which point the coverage and intensity of the lake-effect features decreases.

Just before lake-effect development, surface winds around the lake, including on Promontory Point (W@5 knots), were remarkably light.  Gunnison Island was the only site with an appreciable flow (WNW@15 knots). 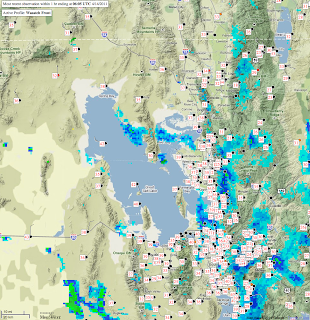 Over the next hour, WSW-SW flow began to develop over the western half of the lake, as indicated by the Lakeside Mountain, Gunnison, Hat, and Badger Island Mesonet sites (Thanks DAQ for getting your data to Mesowest!).  In contrast, the flow remained light and out of the SE over much of the northern Wasatch Front from Bountiful to Ogden.  Perhaps band formation occurs on or near the boundary between these airstreams. 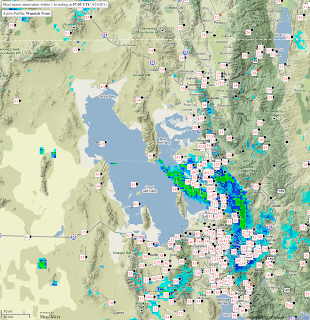 At the 0900 UTC sounding launch, the flow over the western half of the lake had further intensified, with a remarkable 35 knot WNW wind at Hat Island.  Promontory Point was now out of the NW@20 knots.  Winds remained light near Ogden, although the convergence line may have shifted toward the east a smidge as the flow was NW@15 at Antelope Island and WNW@10 near West Haven.  If we are lucky, the east side sounding went up in the cooler light flow near Ogden.  What a score if it did! 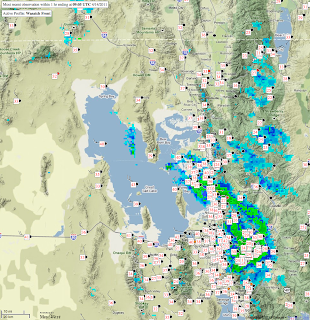 Over the last three hours, ending at the time of the 1200 UTC sounding launch, the surface flow over the northern Wasatch Front has gradually increased and become NW-N.  A healthy confluence line remains, however, over the Great Salt Lake.  It's unclear from this  quick analysis why the lake-effect is weakening, although it could be due to changes aloft (the soundings should help answer that question). 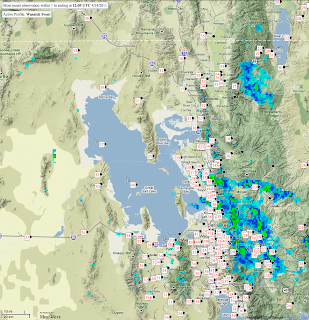 Mesowest sites at Hat Island and Roy (thanks to a citizen's weather observer) illustrate the differing thermodynamic and kinematic conditions on the west and east sides of the lake (technically, Hat Island is on the west shore now that the lake is so low).  At Hat Island, temperatures remained quite near ~42F following the evening frontal passage.  A remarkable veering of the winds occurred in the wake of the front, as the flow shifted gradually around the entire compass.  There was, however, a bit more abrupt transition just after 0700 UTC when the flow increased dramatically.  This may have contributed to or been a response to the development of the lake effect bands. 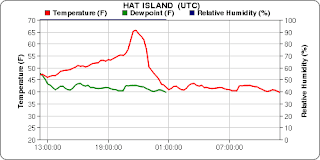 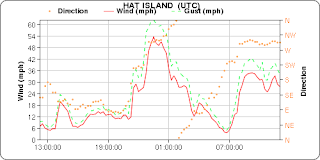 At Roy, which is located not far from our east side sounding site, one also sees the temperature fall accompanying the frontal passage (curiously this fall was less abrupt here than elsewhere), followed by a stabilization of temperatures at or just below 40F.  Winds here, however, are quite light during the lake-effect period, and out of the S, SE, or E until just after 1000 UTC when they become NW and increase in strength. 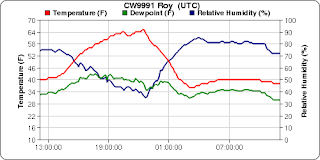 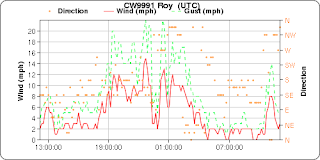 This could be a very interesting event to diagnose.  I did not discuss the large-scale here, but the large-scale surface pressure gradient may be an important component of driving the strong westerly flow over the western half of the lake.
By Jim S Posted at 4/14/2011 06:20:00 AM