The Calm Before the Storm

There was something on my lawn this morning that one rarely sees in Salt Lake City, dew.  It's typically dry enough here that the temperature at night doesn't fall all the way to the dewpoint, but it did last night thanks to a humid lower atmosphere and the calm before the storm.

Yes, things are quiet now, but are going to get interesting later today.  Weak confluence is beginning to act on a broad temperature gradient over Nevada, initiating Intermountain cold front development.


The forecast models continue to generate a strong cold front along this confluence line, which pushes into Utah this afternoon and evening.
You'll notice some pre-frontal precipitation forecast for northern Utah as well, which reflects convective instability in the model.  If we adjust the morning sounding upstream at Elko for the afternoon maximum temperature, it has 437 J/kg of CAPE to play with.  Not a lot by midwest standards, but certainly enough to support deep convection given the strong forcing.  This is consistent with the 250-500 J/kg of CAPE forecast by the NAM for this afternoon (not shown). 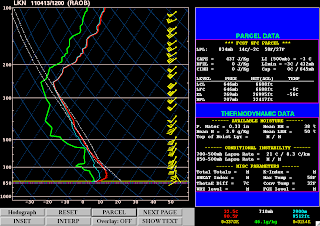 So, thunderstorms are likely, possibly with strong winds and small hail both ahead of and along the cold front.  At issue, however, is whether or not we might also see organized, strong straight-line winds with the cold front.  The NAM produces of a whopper of a cold pool behind the cold front, with a 8-10 mb pressure difference packed into 100 km and the Elko sounding above has a large ~5-10 C saturation deficit in the low levels.
I've learned over the years that you can't treat these events like a midwest squall line and apply the usual CAPE and shear diagnostics to them, in part because the low-levels are much drier than commonly found over the midwest (the development of severe convection in dry low-level environments begs for further research).
This is an event that bears watching and the NWS has already issued a high-wind warning for the Great Salt Lake Desert and Mountains and a wind advisory for several other portions of Utah, including Salt Lake City.  Keep an eye to the sky and a finger to the wind.
By Jim S Posted at 4/13/2011 08:36:00 AM