With the KMTX radar dead thanks to a lightning strike, one needs to resort to desperate measures to peer into our ongoing storm.  Fortunately, I have a secret weapon.

The FAA operates a Terminal Doppler Weather Radar (TDWR) near the southeast shore of the Great Salt Lake.  The TDWRs were developed to help with the detection of wind shear, an important aircraft hazard.  They are also quite useful as precipitation radars, although the Bountiful siting, while advantageous for detecting low-level wind shear near the Salt Lake Airport, suffers from considerable beam blockage to the east (by the Wasatch) and south (by the Avenues foothills).

A loop of TDWR radar imagery this morning shows lake-effect snow squalls moving off the Great Salt Lake into the Salt Lake Valley.

Unfortunately, the east bench and the area around Alta is shielded by beam blockage, but the Alta-Collins stake shows 10" from 5 PM yesterday through 7 am this morning.  They are oh so close to a seasonal total of 700" and a base of 200".  Come on Mother Nature! 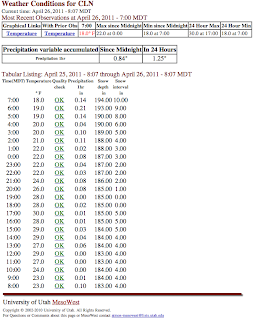