Beaucoup snowpack out there.  Let's have a look thanks to the National Weather Service Colorado Basin River Forecast Center web site. 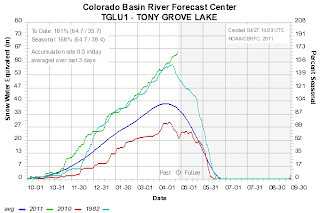 How about a lowland site in the northern Wasatch?  Ben Lomond Trail (6000 ft) is at 23.1" of SWE.  There has been some decline in snowpack the past couple of weeks at this elevation, but the total SWE remains near all-time marks (1984). 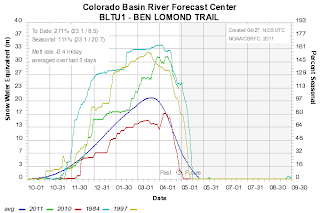 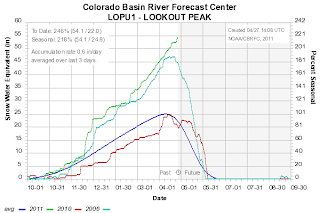 Snowbird is at 72" of SWE, which incredibly is still a smidge behind the peak in 2005. 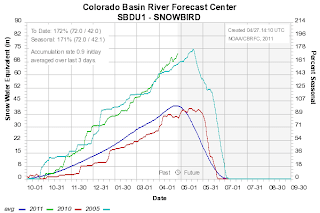 You get the point.  The Snotel records for these sites go back 2 or 3 decades, so they are short-term climatologies, but it is safe to say that we have an incredible snowpack not only at upper elevations, but also at lower elevations, a point well made by National Weather Service hydrologist Brian McInerney in his latest spring flood potential briefing.

In addition, there's another storm coming.  We'll have a brief warmup tomorrow and then another deep trough moves across Utah on Friday and Saturday.  The NAM model brings in 700-mb temperatures that are below -14C by Saturday morning.

In a word, unfreakingbelievable.  So, it is in the bag that we are going to go into May with an incredible snowpack in the upper and lower elevations.  In other words, we're "locked and loaded."  A big runoff is coming.  At issue is will the weather release all this water in a way that is gradual so the flooding is localized or rapid so it is widespread.   Let's hope we don't need an Ark.
By Jim S Posted at 4/27/2011 08:31:00 AM