All Observations Are Bad

A famous meteorologist once said, "all observations are bad, but some are useful."  That's one of my favorite lines, and it applies quite well to the mountain temperature observations today (Tuesday).

In particular, check out the observations in upper Big and Little Cottonwood Canyons at 2100 UTC (0300 MST).  The observing site in Collins Gulch at Alta is a whopping 51F!  Nearby, however, it is 37F at the top of the Collins chairlift and 33F at the top of Mount Baldy. 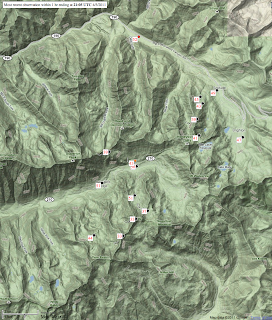 It makes little sense that the Collins Gulch site, at an altitude of 2945 m, would be so much warmer than the surrounding sites, including those at the base of Alta.  Further, the lapse rate (i.e., change of temperature with height) between Collins Gulch and Mount Baldy is 23C/km, more than double the lapse rate that one would expect in a well-mixed atmosphere (9.8C/1000 m).  There are some other odd balls too, such as the collocated 43 and 50 at the base of Alta.

What we are dealing with is a heterogenous mix of sensors and siting characteristics, including some gauges that are not mechanically aspirated and are located in wind sheltered areas.  The Collins Gulch site is quite protected from the wind, which is great for precipitation observations, but can lead to unrealistically high temperatures on sunny days.
By Jim S Posted at 4/05/2011 08:58:00 PM