The coldest airmass of the season so far is now in place over Utah.  A few low temperatures overnight reported to MesoWest are:

Sorry to disappoint those of you enamored with cold temps in Peter Sinks, but it only go down to 31˚F there.

As an added bonus, unlike the post-frontal air in recent weeks, this one is quite clean.  PM2.5 concentrations are at or below 1 ug/m3 at the U, about as pristine as it gets. 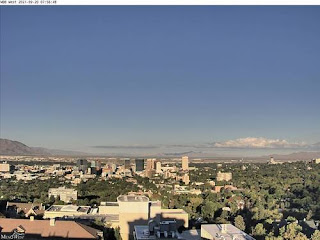 My ride in this morning was brisk.  Probably the first day since at least early June that I pulled on the uninsulated but full-fingered gloves.

Speaking of biking, U Bike Week starts on Thursday, Sep 23.  There are a number of activities planned including a free breakfast next Thursday, Sep 30.  See https://attheu.utah.edu/facultystaff/bike-unity/ for details.

I wish more people rode to campus and have been hoping that the emergence of e-bikes might break down barriers for some.  I used to ride my mountain bike to work, but switched to an e-bike a couple of years ago as it made it easier to ride up the hill home in my work clothes.  Try one if you haven't already.  It's a fun way to commute to the U.

More colors this weekend than last in Big Cottonwood Canyon, but many trees remain green. 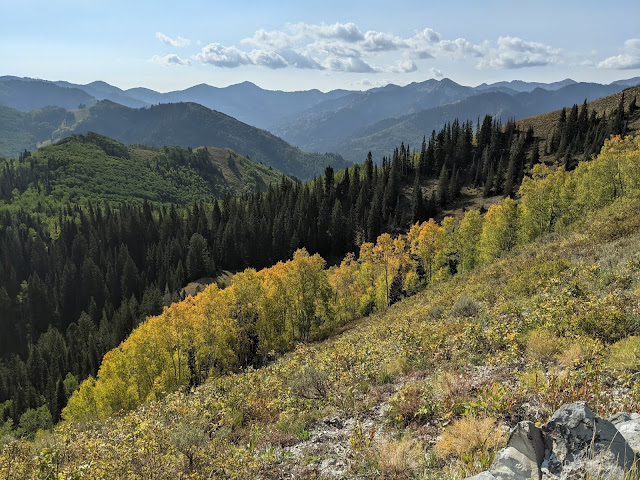 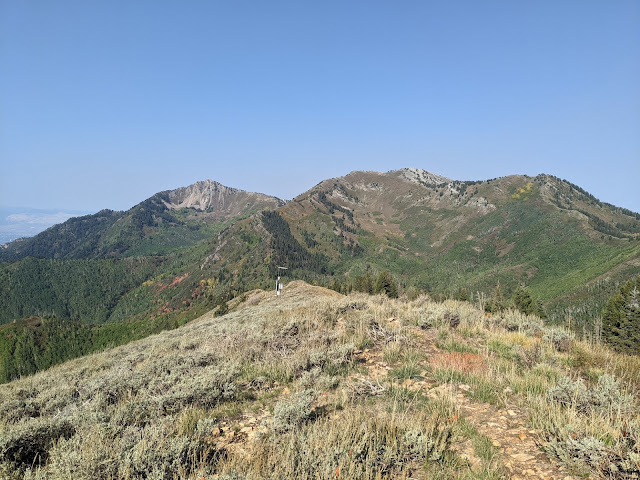 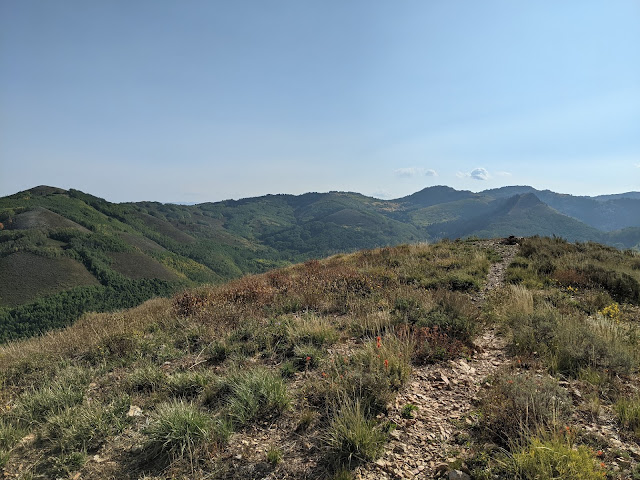 There's been some remarkable trail work between Mill D North and Dog Lake, presumably by the Uinta-Wasatch-Cache National Forest and possibly partners.  Hats off to them for this upgrade, which is a major improvement that should be far more durable than the old trail and is a better option for aging hikers like myself. 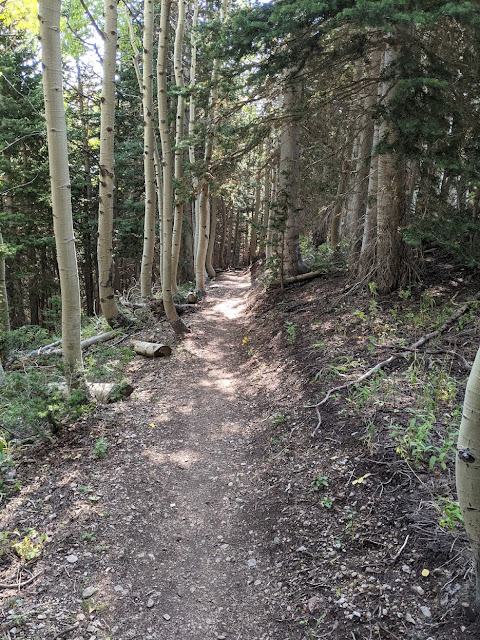 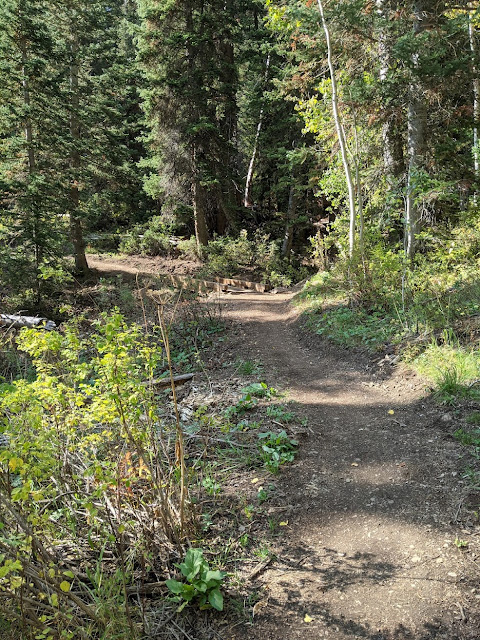 Given the ongoing Avenues Foothills trail imbroglio, I am reminded that the world will be a better place with fewer roads, less development, and more and better trails.
By Jim S Posted at 9/19/2021 03:45:00 PM No comments:

Email ThisBlogThis!Share to TwitterShare to FacebookShare to Pinterest
Labels: Mountains

Keep an Eye to the Sky this Weekend

It's a somewhat surprisingly complicated weather forecast for the weekend, but not that atypical for September as we transition from the so-called monsoonal flow pattern to the cool-season westerly storm track.

We'll begin with a look at the GFS forecast valid 0600 UTC 18 September (0000 MDT Saturday).  At this time, a deep upper-level trough (black contours) and frontal system are pushing onto the northwest coast.  Ahead of this system is a much weaker trough over California.  It doesn't look like much, but it contributes to a surge of monsoon moisture (color contours are precipitable water – a measure of the total atmospheric water vapor) into Utah (red arrow). 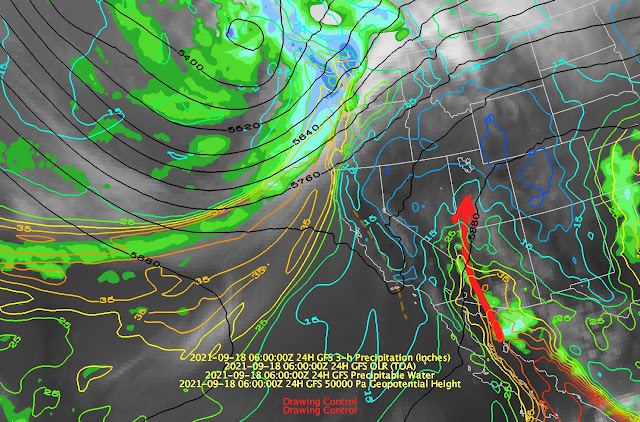 As the deep upper level trough and cold front push into the Pacific Northwest, the weak trough slowly moves northeastward and the monsoon moisture streams into northern Utah.  By 1800 UTC 18 September (1200 MDT Saturday) the GFS is generating some scattered precipitation in northern Utah, mainly in a narrow region coincident with the monsoon surge. 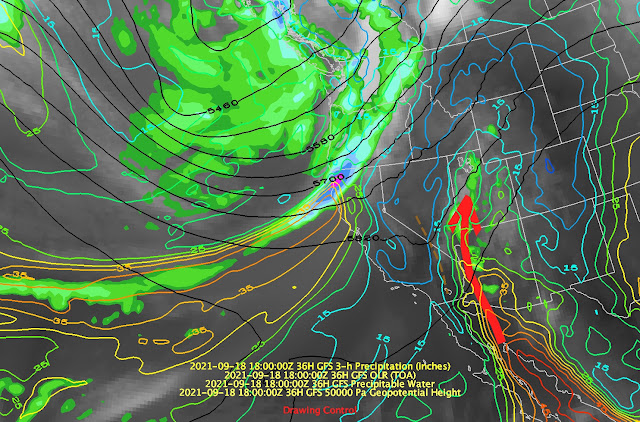 Thus, I would be aware of the threat of showers and thunderstorms tomorrow in northern Utah, especially from about noon through midnight.  These storms could be strong, as indicated by the NWS infographic below.
As indicated by that graphic, keep an eye to the sky and on forecasts and radar imagery if you have outdoor plans.  It's not possible to precisely predict the timing and distribution of these storms a day in advance.
Your outdoor plans on Sunday should also consider the weather forecast as that is when the upper-level trough and the cold front arrive.  The timing of the surface front varies by a few hours amongst the various models.  The NAM brings it through the Salt Lake City International Airport after 6 PM MDT Sunday, whereas the GFS is much faster and brings it through just before 3 PM. 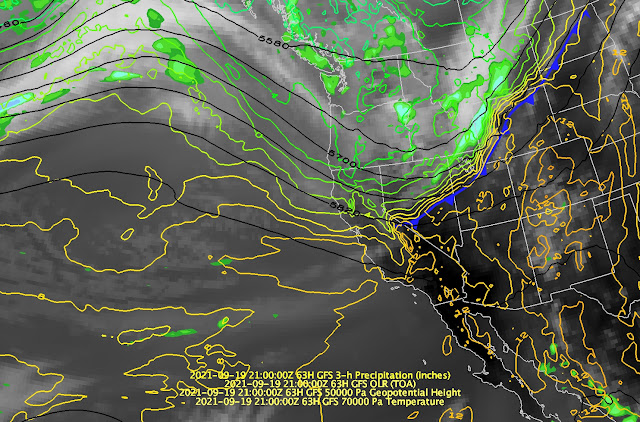 The Euro also calls for frontal passage closer to 3 PM.  Based on this, I suspect the morning will be prefrontal, with the front coming through at some point in the afternoon.  Expect the temperatures to drop precipitously following the frontal passage and on Monday morning they will be around 20˚F at 11,000 feet.
Although cold enough for snow in the higher elevations Sunday night, most of the model runs are favoring little to no snowfall at this time.  Below is the downscaled SREF for Alta-Collins as an example and of the 26 members, only 1 generates more than 2" of snow and the rest are 0.6" or less.

Sharing below this week's COVID-19 update by Dr. Michael Good, CEO of University of Utah Heath.

The good news is that COVID-19 cases on the University of Utah campus have been quite low, with an average rate so far of 9.1 per week.  We now have 83% of University employees and 70% of students fully vaccinated.  Another 6% of students are partially vaccinated.  Let's push these numbers higher and continue to mask.  I thank the students enrolled in my class for their consistent masking.  They have made the semester easier and less stressful for me and I suspect their fellow classmates.

The bad news is that the coronavirus continues to rage through the unvaccinated population in Utah. Hospitalizations and ICU levels are now almost as high as they were during the peak of the pandemic last fall and winter.  Cases amongst children (1-14 years old) are much higher this fall than last.  In contrast, cases and hospitalizations amongst the vaccinated are much lower and the former has even begun to go down the past couple of weeks, perhaps due to adjustments in activities and behavior or greater masking amongst the vaccinated.

I have blogged previously about the threats of digital misinformation to society (see Challenges of Science Communication in the 21st Century, posted just before coronavirus exploded in the U.S.).  We are seeing this playing out now.

Email ThisBlogThis!Share to TwitterShare to FacebookShare to Pinterest
Labels: COVID-19

Let's Not Lose Our Minds

Over the past several days, the extended range models have been suggesting that we will see a switch to cooler weather later this weekend or early next week.  The latest (0600 UTC) GFS forecast for 1200 UTC (0600 MDT) Monday morning is unlike anything we've seen in some time with a deep upper-level trough centered over the interior west and Utah.

If you must ask, here's a peak at our downscaled NAEFS product.  Most members generate 0-3" of snow, but there are a few that are a bit more enthusiastic.

A lot can happen in the next 5 days.  I wouldn't read too much into detailed scenarios like lake-effect potential at this time.  It's going to get colder, but let's see how forecasts evolve over the next few days before worrying about fine-scale details.
Also, no need to panic about persistent weak layers from this storm.  Usually September snow melts out nearly everywhere if not everywhere and that will certainly be the case if we only get a couple of inches.
By Jim S Posted at 9/15/2021 08:27:00 AM 4 comments:

Today was an absolute peach of a day with smokeless air, blue skies, and hints of fall. 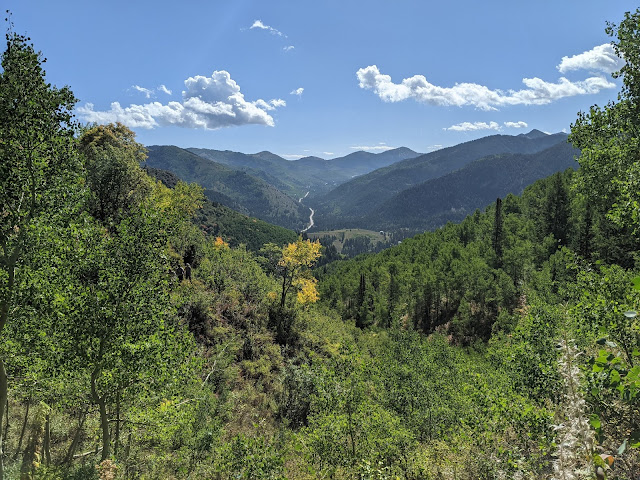 We've had few days like this over the past several weeks and I'm glad I was able to take advantage of it.

I hiked up Gobblers Knob via Butler Fork and Mill A Basin.  If you're curious about the leaves, things are just starting to get going with a few trees and bushes changing as illustrated in the pictures above and below. 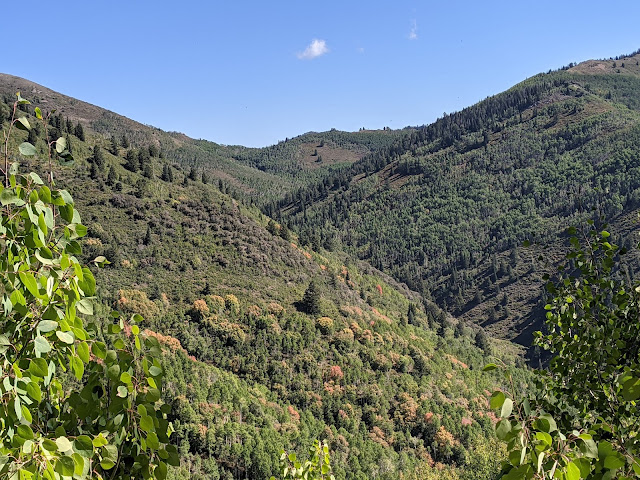 The aspen groves of Mill A Basin and upper Big Cottonwood are still green, although if you look carefully, you can see one patch of yellow along the Park City ridgeline in the 2nd photo below. 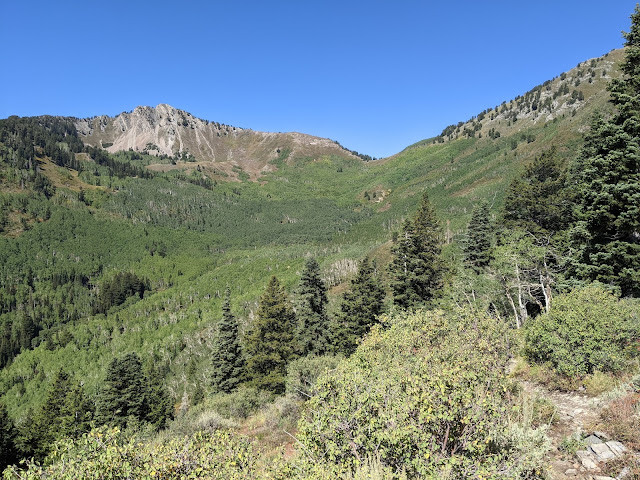 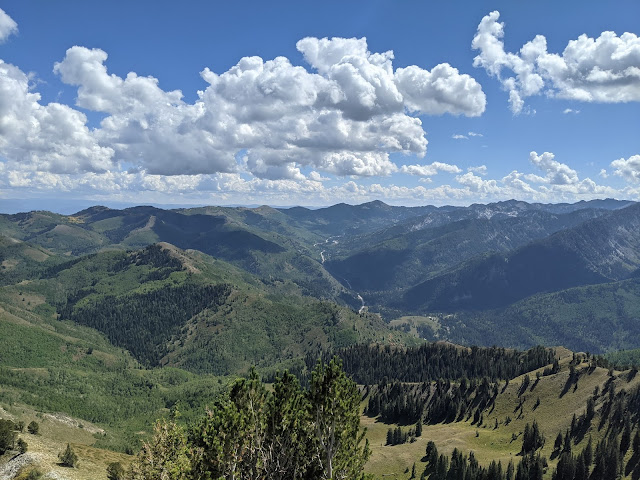 No snow yet, but it is acceptable to click on the photo below and start dreaming.

The fall equinox is only ten days away.