It was a remarkable day today with lots of thunderstorm activity in the Salt Lake Valley and even snow, which continues to fall outside my window.

Precipitation rates today where quite high and persistent.  Cooling from evaporation and melting contributed to the development of the cold front, cooling of the post-frontal airmass, and lowering of the snow level to the valley floor.  The 0000 UTC (0600 PM MST) sounding shows quite nicely that the top of the cold dome sits just below 700 mb (about 10,000 ft) where there is a stable layer and pronounced backing (counter clockwise turning of the wind) with height.

The shallow nature of the cold air means that frontal passage still has not occurred (as of 6 PM MST) on the high ridges and peaks in the Wasatch Mountains east of Salt Lake.  Note how the winds on top of Mount Baldy, Cardiff Peak, and at upper elevations around Park City Ski Area are still southerly! 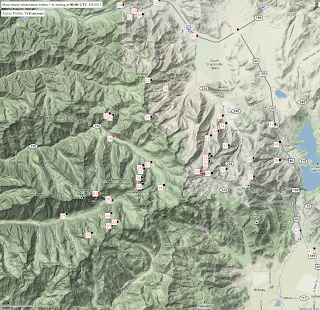 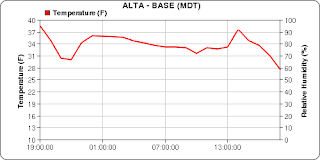 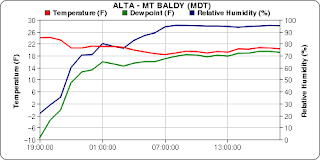 Alta skiers will be disappointed to know that the heaviest precipitation thusfar (as of 6 PM) has fallen north of the Cottonwood Canyons.  In fact, Salt Lake City International Airport received .34 inches of snow water equivalent today, exactly the same amount as Alta-Collins (working out to 3 inches of snow at the latter).  Alta was just south of the really good action today.  1.1" of snow water equivalent fell on Ben Lomond just north of Snowbasin as of 3 PM, and they are probably well past that now.
By Jim S Posted at 4/07/2011 07:16:00 PM