During and following the 0600 UTC sounding launch, the band that previously extended across Promontory Point and Ogden moved downstream and dissipated, although it did produce a fairly intense convective cell that moved across the northern Wasatch Front.  As of  the end of this loop (0815 UTC), there appears to be little attributable to lake processes going on.

The MesoWest surface plot shows that the flow on Gunnison Island and Promontory Point has veered to westerly.  Not exactly optimal. 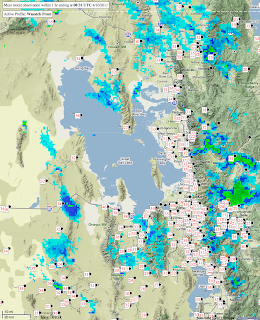