After my last class on Wednesday, we bugged out to Moab for a much needed thawing out.  The drive back today was incredibly dramatic from a meteorological perspective, beginning in mild pre-frontal conditions in Moab where it was about 62F, and ending in scattered snowshowers and temperatures in the 30s.  We'll call it 240 miles and 24 degrees for alliterative purposes.

Currently, convective snowshowers abound around northern Utah, with some indication of a bit increased intensity and duration downstream of both the Great Salt Lake and Utah Lake (a loop shows this better, but the best I can do on short notice is the still show below). 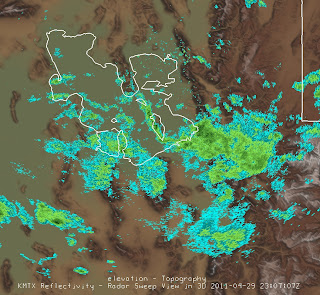 There was a really nice banded, ragged cloud base over Utah Lake as we drove through Provo, but I couldn't risk a quick snapshot given the traffic and driving conditions.  Yes, I know I should be able to simultaneously talk on a cell phone, text, and take photos, but keep in mind that my first computer was a Commodore 64.

Lake-effect prospects for tonight look quite good with deep instability and moisture.  We'll have to see if Mother Nature brings the goods and if she directs the action to the Cottonwoods before the flow veers to northerly.