The 1800 UTC soundings should now be in flight at the North and East side sites.  Some major changes have occurred in and around the Great Salt Lake since the last sounding.  In particular, temperatures have increased to the mid to high 30s around much of the lake.  A positive lake-land temperature difference remains (note the 42F at Hat Island), but is weakening.  In addition, the overlake confluence has weakened as the flow in the Lakeside mountains has veered to more NWerly, while the flow near Ogden has backed also to NWerly.  Some evidence of confluence persists, however, in the northern Salt Lake Valley. 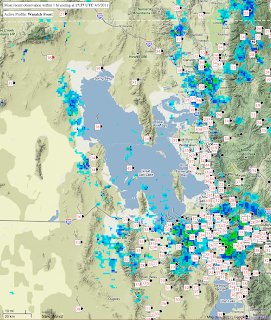 The lake-effect since about 1500 UTC was confined to near and downstream of the south shore of the Great Salt Lake, but with the land surface now being strongly heated, is beginning to break down.  Further, scattered snowshowers are developing around the lake due to the surface heating.

This round of lake effect will probably continue to fall apart as the lake-land temperature difference weakens and scattered snow showers intensify during the afternoon.  At issue is whether or not we should hang out and see if things redevelop late in the day and in the early evening when the land surface begins to cool.
By Jim S Posted at 4/03/2011 12:12:00 PM