We're in the process of launching the 1200 UTC soundings.  Over the past couple of hours, the strongest and most persistent radar echoes have become increasingly confined to the area from North Salt Lake to Ogden.

The Mesowest surface plot shows strong westerly flow over the western side of the lake, including Promontory Point.  Temperatures around the lake are now a few degrees cooler than found at Hat Island, although the lake-land temperature difference is still rather small. 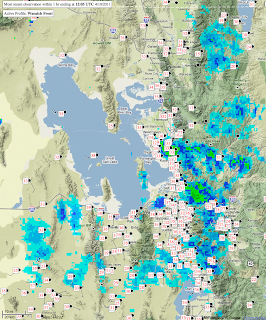 It's quite remarkable that the flow refuses to go around to northwesterly at low levels.  Promontory Point remains WNW.  Even Mount Baldy never came around to NW following trough passage and remained westerly all night. 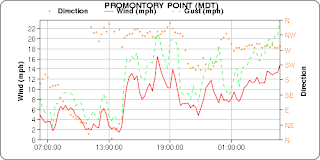 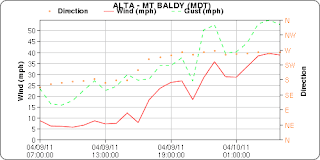 This may be due to the strong zonal pressure gradient that lies over the state (not shown).  This westerly flow was better anticipated by the GFS than the NAM, as illustrated by the soundings below.

This highlights one of the challenges of lake-effect forecasting as this contrast in wind direction makes a big difference in over-water fetch and the location of precipitation.
By Jim S Posted at 4/10/2011 06:22:00 AM