The latest satellite imagery and RUC 700-mb temperature analysis shows quite nicely the development of post-frontal clouds and development of the cold front over northeastern Nevada.

The front should continue to intensify over the next few hours especially given the clear pre-frontal skies for heating the boundary layer.  Precipitation coverage is still not widespread, although one strong cell has developed along the front near Wendover. 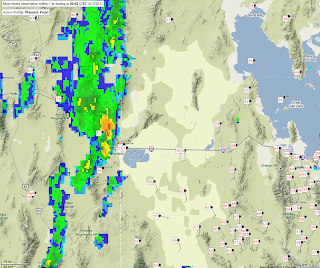 Although there will be an abrupt temperature change across the front, the magnitude may not be quite as large as seen in other events, such as the 2002 Tax Day Storm.  The post-frontal winds remain relatively modest.  The next couple of hours, however, should prove interesting as the frontal collapse ensues.
By Jim S Posted at 4/13/2011 02:09:00 PM