Our mobile teams are on site and the 1500 UTC soundings should be launched now from both our north and east side sites.  The latest radar shows a wide-spread lake-effect event is underway.  The back edge of the lake-effect region has moved downstream some in the past hour, but lake-effect persists over the southern portion of the lake and northern Salt Lake Valley.

The 1500 UTC MesoWest surface plot shows a phenomenal confluence line over the lake with westerly to west northwesterly flow west of the lake (and at Hat Island) and NNW flow on the east shore. 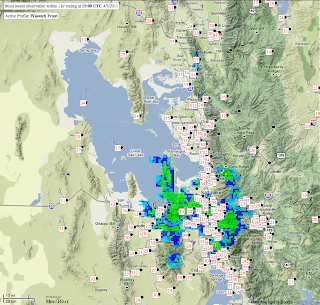 An aspect of this event that is quite fascinating is the cloud band evolution.  Note how the bands over the lake have pushed southwestward over the past hour and become oriented a bit more across the lake axis. 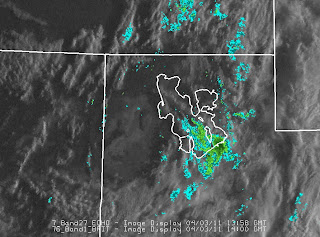 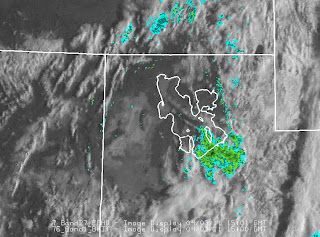 The east side team reports that the frontal stable layer is still over the lake aloft, with a base near 600 mb. Thus, this remains a case of fairly shallow convection.  They also found a northerly low-level jet about 400 m above ground level, which is consistent with the MesoWest data above.  Very interesting.
By Jim S Posted at 4/03/2011 09:25:00 AM