It's going to be a very interesting day in northern Utah.  The morning sounding shows steep lapse rates extending through the middle troposphere.  CAPE is limited, but with some surface heating, may get sufficiently high for us to see good rumblers in northern Utah.


At present, precipitation and a sharp wind shift and temperature contrast are draped across extreme northern Utah. 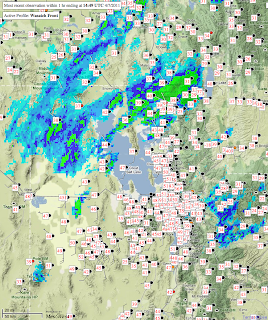 The NAM, however, generates a new band to the south over Salt Lake, that becomes dominant and quite intense.  At issue is why this occurs, although it forms along the Great Basin Confluence Zone that frequently forms during large-scale southwesterly flow.

We're still not sure why this kinematic feature forms, but it appears to play a role in frontal development (West and Steenburgh 2010) and I guess we'll see today if perhaps it can contribute to convective initiation.
Will we be Thunderstruck?  Perhaps only Angus Young knows.
By Jim S Posted at 4/07/2011 08:56:00 AM