Although it remains a cornerstone of most introductory level meteorology textbooks, the Norwegian Cyclone Model, as first proposed by Bjerknes and Solberg (1922), fails to properly explain some aspects of frontal-cyclone evolution and is difficult to apply to some cyclones.
A great example is provided by the 1200 UTC 4 April GFS forecast, which produces a powerful cyclone with a central pressure of ~940 hPa over the north Pacific at 0300 UTC 7 April. 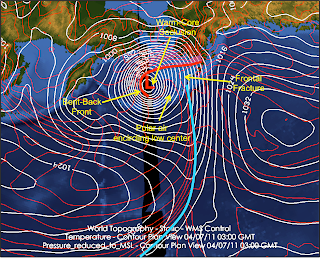 In particular, note the following:


Although this case fits the Shapiro and Keyser (1990) conceptual model quite well, there remain cyclones that are clearly better described by the Norwegian Cyclone Model.   Work is needed to provide a more robust conceptual model describing cyclone evolution.  With regards to occlusion, a good effort to do this is provided by Schultz and Vaughan (2011).
By Jim S Posted at 4/04/2011 02:38:00 PM

Email ThisBlogThis!Share to TwitterShare to FacebookShare to Pinterest
Labels: Cyclones