As promised, an upper-level trough and baroclinic zone have moved through northern Utah, weakening the inversion and scouring out some, but not all of the pollution resident over the valley.  Smog and haze can still be seen from several locations around the valley. 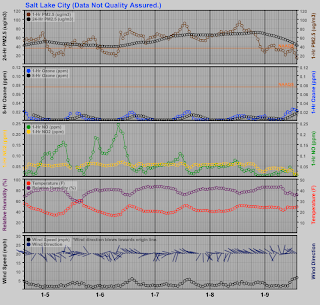 Because of the weak flow, the removal of polluted air from the Salt Lake Valley has been slow and one can see evidence of urban pollution in the Wasatch Mountains today.  For example, there was quite a bit of haze at times in White Pine Canyon today. 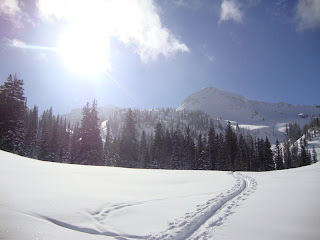 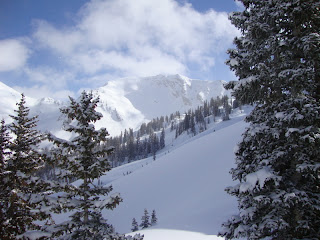 Further evidence of the transport of urban pollution into the Wasatch Mountains is provided by CO2 measurements from the top of the Snowbird tram.  CO2 concentrations climbed from near unpolluted background values of ~392 ppm late in the day yesterday (Jan 08) to ~396 ppmm today, with a spike to 404 ppm.  I suspect that the spike reflects the movement of air with considerable urban influence over Snowbird.

Today provides a nice example of the gradual removal of urban pollution by vertical and horizontal transport and mixing.  It provides a nice opportunity to observe processes that usually operate much more quickly.
By Jim S Posted at 1/09/2011 04:22:00 PM