Death of an Anemometer

Cup and windmill anemometers are frequently used for remote observations in mountainous regions, including the Wasatch of Utah.

Both are vulnerable, however, to heavy riming, which prevents the movement of the cups, windmill, and/or vane.  Such riming occurs frequently in maritime mountain ranges, but is less common in Utah.

The warm storm last night, however, appears to have led to heavy riming and the failure of the wind sensor at Cardiff Peak.  The tell-tale sign of riming is a rapid, unnatural drop in wind speed to zero, and this is what happened at Cardiff Peak between midnight and 1 am MST last night. 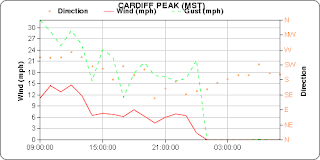 Given that the wind direction changes some after 1 AM, it could be that the cups or windmill are not rotating, but the vane is able to move some.  Of course, there's also the possibility that the sensor was blown over, but I suspect this is unlikely.

At issue is if the rime will melt, restoring the instrument to normal operations, or if someone from Little Cottonwood Snow Safety team will need to go up and clean it off.
By Jim S Posted at 1/17/2011 09:40:00 AM