Even after 15 years in Utah, I'm amazed at just how dramatically the temperature varies across the state when cold pools form in valleys and basins.  Case in point for today is the Uinta Basin of northeast Utah.

The Uinta Basin is quite deep, with the Uinta Mountains to the south and Book Cliffs and Tavaputs plateau to the south, and higher topography to both the west near Strawberry Reservoir and to the east in Colorado.  Technically, the Uinta Basin is not fully enclosed as the Green River does cut through it roughly from north to south, but it is highly isolated topographically and a great place for persistent cold pools in the winter.
At 1800 UTC (1100 MST) this morning, temperatures in the lowest portions of the Uinta Basin, including the towns of Duschesne, Roosevelt, and Vernal, were near 0F.  This is more than 20F colder than found in the Salt Lake Valley or at higher elevations in the surrounding highlands. 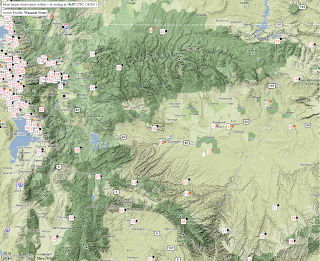 The intensity of the low-level inversion is well illustrated in the surface map above by the 0F observation at Starvation Reservoir immediately east of Duchesne (elevation 5720 feet) , and 20F observation at the Blacktail RAWS site immediately to the north (elevation 7311 feet).
Temperatures at Starvation have been falling to well below zero at night, whereas they have remained in the positive numbers at Blacktail.  For you winter campers out there, this is why it can sometimes pay to camp high rather than low! 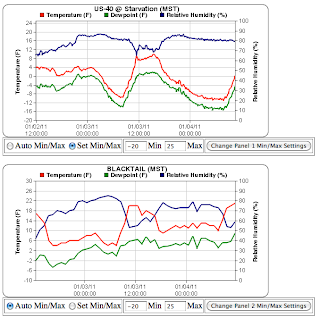 On the plus side, although it is cold, it is clear and sunny at Starvation today, in contrast to the haze and clouds that persist over the Salt Lake Valley.  Good ice fishing weather. 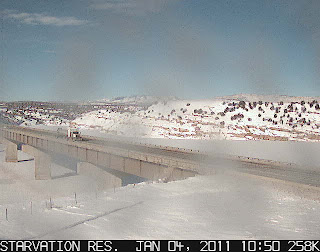