We are presently in the midst of another major change in the weather.  Over the past 24 hours, temperatures climbed dramatically in the mountains.  For example, at the Alta-Collins observing site, the temperature at 8 am this morning was 17F, compared to -1F yesterday. 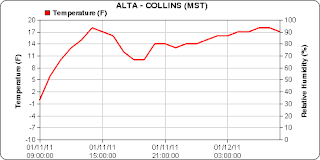 This has occurred as an upper-level ridge has developed over the western United States.  This ridge will be the dominant large-scale weather feature over the next week.  Conventional wisdom suggests that upper-level ridges produce nice weather, but in this case, we are dealing with what meteorologists refer to as a dirty ridge.  Most dirty ridges are long-wave features, but with low amplitudes.  As a result, clouds and precipitation frequently penetrate downstream of the ridge axis, especially when a short-wave trough moves downstream of the long-wave ridge axis.

An example is provided by the 42-hour NAM forecast from 1200 UTC this morning, which is valid for 0600 UTC 14 Jan (11 PM MST 13 Jan).  Note the broad long-wave ridge centered roughly on the Pacific coast, but also the embedded short-wave trough located over Nevada, Idaho, and Utah.

It is the short-wave trough that should give us some needed mountain snow on Thursday night.  I don't like to be greedy, but we've had less than 10" of snow in the Cottonwoods since the New Year began and could use a freshening up.

It looks like we'll remain downstream of the dirty ridge for a few days.  For the mountains, this means some periods of snow, but also warmer temperatures, higher winds, and periods of layered altostratus clouds that could bring rime.  Indeed, a dirty forecast for a meteorologist.
By Jim S Posted at 1/12/2011 09:13:00 AM