In an earlier post, I presented some photos of unusual snow sculptures that were observed on a high wind-swept ridge in the Stansbury Mountains. 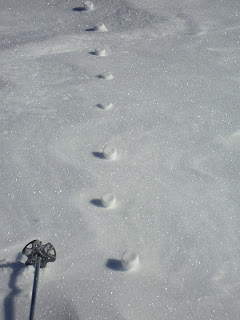 Here is my hypothesis, which is somewhat similar to that of one reader (Will).  At some point, there was freshly fallen snow on the ridge, which was packed down by an animal.  Eventually, the wind increased, and the freshly fallen snow was more easily removed than the packed snow, leaving the trail of snow pedestals above.

Will suggest that it could have been a deer, but the lack of a second set of parallel tracks suggests it may have been a different animal.  One possible candidate is the long-tailed weasel, which I occasionally see in the high mountains of Utah, even in winter (although in winter, they are usually white, in contrast to the photo below).

The long-tailed weasel runs by pushing off their back legs and landing on its front legs.  It then moves its hind legs forward, so that the hind paws are directly behind the front paws in a compact area.  Perhaps this is the animal that packed the snow in a pattern as seen in the photo.
There may be some other candidates as well...or maybe better hypotheses.
By Jim S Posted at 1/10/2011 09:21:00 AM

Email ThisBlogThis!Share to TwitterShare to FacebookShare to Pinterest
Labels: Trivia