The National Climatic Data Center (NCDC) has released its preliminary climate analysis for 2010.  For 2010, the globally averaged temperatures (based on land and ocean temperature) tied with 2005 as the warmest calendar year in the instrumented record, more than a full degree fahrenheit above the 20th century mean temperature. 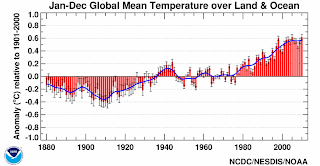 Much is made about the year-to-year rankings, but in reality the range associated with the 2010 temperature overlaps with that of several other years.  Further, phenomenon like ENSO tend to cause considerable temperature variability from year to year (as is evident in the graph above), so I tend to look at the longer term signal over many years rather than the rank of any individual year.  NCDC reports that 2001-2010 was the warmest decade in the instrumented record, surpassing 1991-2000 by 0.65F.  In fact of the 10 warmest years in the instrumented record, all but one (1998, the year of a very strong El Nino) has occurred since 2001.