Today I was like a kid in a candy shop checking out the clouds and optical displays in Little Cottonwood Canyon.  I could write an entire book on what I observed, but will provide the CliffsNotes version for this post.

A special sounding collected in West Jordan for the Persistent Cold-Air Pool Study (PCAPS) provides much needed context for the photos and analysis that follows.  The sounding, launched at 1715 UTC (1015 MST), shows two distinct inversions.  The lower inversion was between about 800 and 775 mb and caps a surface-based layer that is nearly well mixed.  The upper inversion was located just above 700 mb, or around 10,000 feet above sea level.  It also shows that the winds throughout the troposphere were very light (10 knots or less below 400 mb).  In other words, there was weak large-scale flow and thermally driven circulations associated with daytime heating were likely to dominate circulations in the mountains.

The sounding also shows that the atmosphere was saturated or nearly saturated at the base of each of the inversions.  Thin clouds were observed at times at each of these levels, as illustrated by the cloud-cam loop from Olympus Cove between 1800 and 1900 UTC (1100 and 1200 MST).  The rapid retreat of the altocumulus deck near the end of this loop, however, suggests that this cloud layer was quite sensitive to any perturbation in vertical velocity.

2. Little Cottonwood Cloud Evolution and Linkages to Thermally Driven Flows
A layer of altostratus located at the base of the higher inversion blanketed Little Cottonwood Canyon this morning, but largely dissipated by mid morning.  Clouds persisted, however, along the south-facing wall of the canyon, hanging on by a thread by about noon. 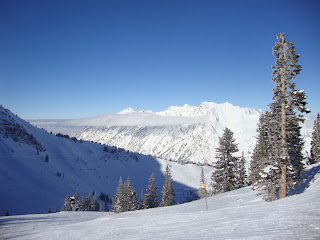 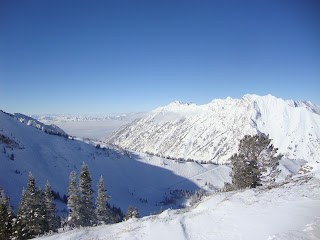 The persistence of this cloud was likely due to the development of a cross-valley circulation as the south-facing slopes of Little Cottonwood Canyon were heated by the sun, whereas the north-facing slopes were largely shaded.  As a result, there was probably a weak katabatic drainage flow over the north-facing slopes (e.g., Snowbird and Alta), which were the first to become cloud free due to the sinking motion, but upslope flow over the south-facing slopes, which enabled the altostratus to persist.
Later in the day, however, the altostratus reformed.  I suspect this was due to the development and deepening of thermally driven up-canyon flow.  Note the thickening stratus deck in these sequential mid-afternoon panoramas taken toward the northeast from near the summit of the Sugarloaf chair.

3. Optical Displays
An added bonus was that the altostratus produced quite a bit of diamond dust.  Diamond dust is composed of tiny ice crystals and it can produce some spectacular optical displays.  We observed this beautiful sun pillar from the Sugarloaf chair 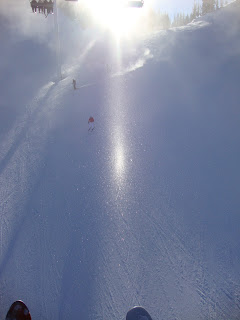 and a partial halo (a.k.a. icebow) with just a hint of a sun dog. 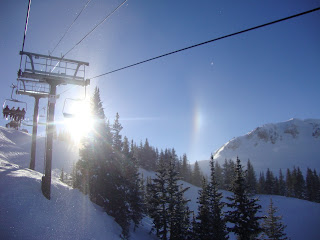 4. Descent into the Valley Gunk
We departed the Alta parking lot at about 2230 UTC (1530 MST).  Skies were beginning to clear, but clouds persisted on the south-facing aspects. 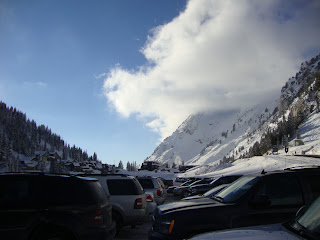 At around 7000 feet, we encountered the lower inversion.  Beneath the inversion, the atmosphere was filled with haze and smog, but there was also a thin layer of stratus in places. The temperature in our highly scientific car thermometer was 25F above the haze, but reached a minimum of 19F in the lower canyon, before rebounding to 26F once in the Salt Lake Valley. 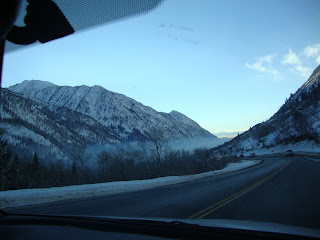 Near the canyon mouth, we observed these crepuscular rays.  Crepuscular rays are usually produced when sunlight streams through cloud gaps, but in this case, they were created by the serrated, tree dotted south ridge above Little Cottonwood Canyon.  The apparent convergence of the sun's rays is an optical illusion, much like the apparent convergence of train tracks in the distance. 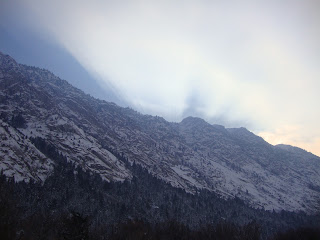 Finally, there's sunset from the Avenues.  Truly another world down here compared to Alta. 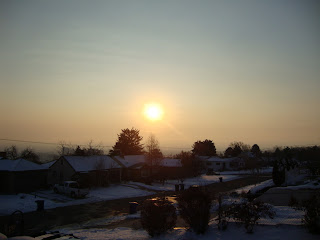