Bears, Packers, Jets, Steelers.  It's hard to imagine a better matchup of black-and-blue-type football teams than that (although the AFL-derived Jets might not be a classic old school team, they have the attitude).

I'm especially pleased to see it is going to be well below freezing for both the NFC and AFC championship games.  Championship football should be cold and a cold anticyclone is in firm control over the eastern United States. 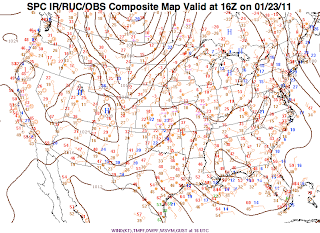 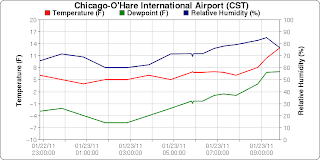 Further east, in Pittsburgh, the current temperature is also an unlucky 13F, with a forecast high of 16F. 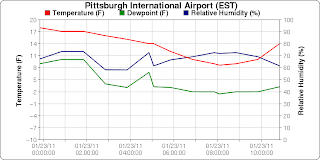 Kickoff, however, is at 1630 MST, after sunset, so it's going to be colder during the game.  BRRRR.  Fair conditions should prevail at both locations, so a snow bowl scenario is unlikely.  Nevertheless, I'll be happy to watch these games from a warm bar with a cold beer in hand.

This is of course balmy weather compared to the mother of all cold NFL games: The 1967 NFL championship game played between the Cowboys and the Packers at Lambeau Field, better known as the Ice Bowl.  Considered by many to be the greatest NFL game ever played, Wikipedia lists the game-time temperature as -15F, with a wind chill of -36F.

Email ThisBlogThis!Share to TwitterShare to FacebookShare to Pinterest
Labels: Trivia