I had an opportunity today to travel deep and high into the Stansbury Mountains and take a look at the structure of the fog, haze, and smog to our west.  Perhaps the most interesting photo is this one looking east  toward South Mountain, which separates the Tooele Valley to the north (left) from the Rush Valley to the south, with the Oquirrh Mountains in the distance and the Wasatch Mountains on the far distant horizon.  It was taken at roughly 2 PM MST.

Note the extensive smog/haze and stratus coverage over most of the Toeele Valley, and how it abuts up against South Mountain.  In contrast, the Rush Valley to the south is much clearer, although there is some haze or smog present.  If you look beyond the Rush Valley, you can see extensive haze and smog in the distance over Utah Valley (cough cough).
We consistently noticed a dark patch north of the northern tip of the Oquirrh Mountains and over the Great Salt Lake.  This is evident in the photo if you click on it for a larger image.  We weren't sure if this was because the haze and fog was thinner, with the lower albedo lake-surface resulting in a dark patch, or some other bizarre cloud-haze-smog interaction.  It was a real head scratcher.
A bit later, at about 3:30 PM MST, the stratus has pushed further south, the combined stratus/haze layer had thickened, and haze was pushing across the gaps to the east and west of South Mountain.  Really cool stuff! 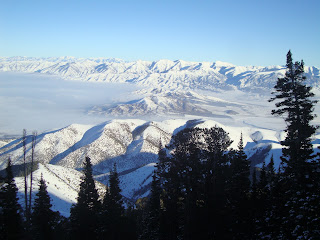 This photo taken toward the south from near the summit of Deseret Peak at about 11 am MST shows what appears to be the overshooting plume from the coal-fired Intermountain Power Plant near Delta. 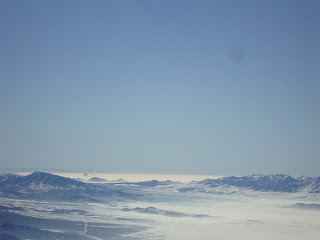