From Spring to Winter

Climate is what you expect, weather is what you get.  There is no "normal" when it comes to weather.

Case in point is the last 48 hours.  On Friday afternoon, we were in the upper level "col region", between a closed upper-level low centered over San Diego and a short-wave upper-level ridge over Montana and Idaho.  At 700 mb (roughly 10,000 feet), the flow was weak the temperature was a comfortable 0C (in contrast to the sub-freezing temperatures near the valley floor - hence the inversion).

At 2 PM Friday afternoon, mountain temperatures were quite balmy and ranged from the low 30s to mid 40s (Fahrenheit).  Some of the higher temperatures below likely reflect poor gauge aspiration and are likely higher than actual temperatures. 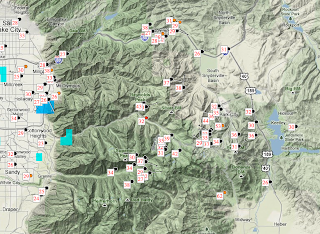 We even found this wet-slab avalanche on a SE-facing aspect while trudging around the mountains. 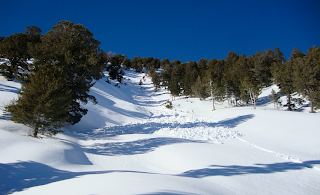 All in all, it was spring like, except for the low sun angle, which enabled good snow conditions to persist on most aspects on the north side of the compass.

Today is a different story.  Although masked in the valley by the persistent cold pool, a cold front has passed through northern Utah and temperatures in the mountains have plummeted.  This morning's (1200 UTC) NAM analysis shows 700 mb temperatures near -16C.

Temperatures at the Alta-Collins site fell from a high of 27F yesterday afternoon to 0F this morning. 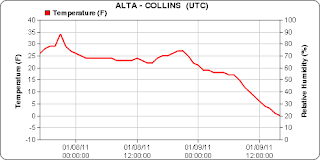