It's not easy to perform a surface frontal analysis tonight.  There are two fairly well defined boundaries, I'll call them frontal fragments, evident in the MesoWest data.  The first is in southwestern Wyoming there there is a wind shift and collocated 10-12F temperature contrast just west of Green River.  This is the likely position of the Arctic front that will push into northern Utah from the east late tonight. 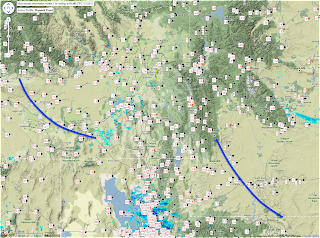 The second is over the Snake River Plain just east of Twin Falls where there is also a wind shift.  The baroclinity here is a bit more broad, with temperatures decreasing from about 30F near the front to the single digits in the upper Snake River Plain.

In contrast, it is very difficult to nail down a wind shift or front in the intervening highlands.  The flow is almost exclusively from the northern half of the compass and finding the leading edge of the cold air is very difficult.  Although Arctic air is leaking into this region, there is no clearly defined airmass boundary.
By Jim S Posted at 1/31/2011 07:04:00 PM