There are probably as many definitions of front as there are meteorologists and, if there is something that meteorologists love to argue about, it is surface frontal analysis.

Mother nature does not think in terms of fronts.  She thinks in terms of fundamental physical processes.  Those processes frequently produce strong temperature gradients or, what humans, for the sake of convenience, call and frequently analyze as a front.  However, the magnitude of temperature gradient (or temperature contrast) required for the existence of a front remains subject to debate and frequently the position of a front on a surface weather map is ambiguous.
The classic example is a composite of the fronts and troughs analyzed by the participants of a workshop convened at the National Meteorological Center (NMC, now the National Centers for Environmental Prediction, NCEP) and published in Uccellini et al (1992) and Sanders and Doswell (1995).  Note the lack of agreement with regards to frontal position and, in some cases, the existence of a trough or front. 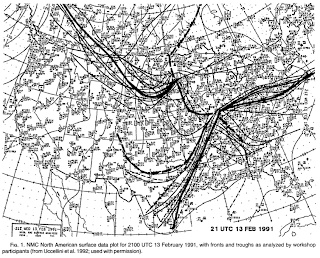 A frontal zone is traditionally defined as an elongated zone of strong horizontal temperature gradient, with the front analyzed on the warm side of the zone.  Issues arise, however, because strong is a subjective term, limited surface observations frequently preclude accurate analysis of the actual temperature gradient, and diabatic and boundary layer processes can frequently obscure airmass changes associated with frontal passages.  Sanders (1999) proposed that surface fronts be distinguished from nonfrontal baroclinic zones (i.e., baroclinic zones not accompanied by a significant cyclonic wind shift) and baroclinic troughs (i.e., a pressure trough and cyclonic wind shift with an insufficient temperature contrast to be called a front).  At issue is what magnitude of temperature gradient to use to distinguish between a front and a baroclinic trough.  Sanders (1999) chose a minimum temperature gradient of 8C/110 km (which is 8C per degree latitude - hence the odd units), but not matter what value is chosen, we are still dealing with an arbitrary threshold.
In practice, I like to distinguish between fronts and baroclinic troughs, but don't use an objective temperature gradient threshold to distinguish between the two.  I typically use the term front when there is a clear and abrupt contrast in temperature and the term baroclinic trough when there is a baroclinic zone, but no clear and abrupt leading edge.  This is admittedly subjective, but such are the compromises that need to be made when applying an imperfect conceptual model to a complex atmosphere with limited surface observations.
So lets have a look at what happened early this morning.  If we look at the WBB time series, it is pretty clear that temperatures are several degrees lower this morning than yesterday morning, despite widespread cloud cover, so it appears there has been an airmass change overnight, but was there a frontal passage? 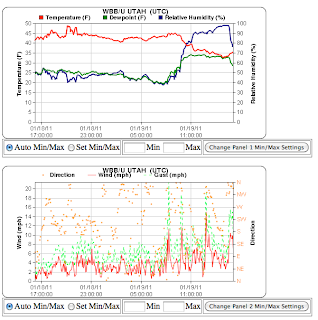 The time series shows the most rapid decrease in temperature occurred at around 1000 UTC (0300 MST).  The temperature fell from about 45F to 35F (about 5C) over a two hour period.  Concurrently, the dewpoint increased from 20F to 34F.  The RUC analysis at 1000 UTC shows broad baroclinity over much of the Intermountain West, but it is somewhat more concentrated along a cyclonic wind shift just upstream of Salt Lake City. 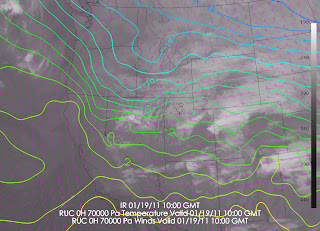 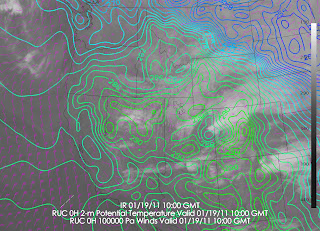 Not being a fan of objective surface analyses in our part of the world, I like to take a look at the actual observations from MesoWest.  As shown below, at 1000 UTC, temperatures in the Salt Lake Valley are in the low 40s (44F at KSLC), but the temperature contrast to the north is pretty weak.  If one goes all the north end of the Great Salt Lake, the temperature is still 37F. 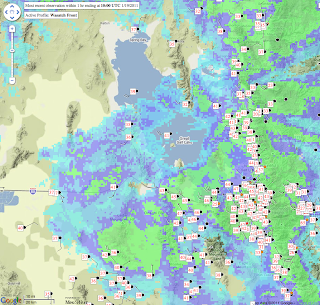 Thus, I classify this event as a baroclinic trough.  There is a baroclinic zone and cyclonic wind shift at 700 mb, but the magnitude of the temperature gradient at the surface is weak (the 7F temperature contrast between KSLC and the north end of the Great Salt Lake is <4C/110 km).  Thus, it doesn't meet my definition of a front.  Others may have differing perspectives.
By Jim S Posted at 1/19/2011 10:20:00 AM