A Remarkable Snow Year, So Far

For the Sierra Nevada and Intermountain West, it has been a remarkable ski season thus far.  SNOTEL observations show the snowpack in these regions to be at least 125% of average, with many basins over 200% of average.  Skiers and water managers rejoice!

Zooming into the Colorado River Basin and Great Basin, we see lots of cool colors, indicative of deep snowpacks, and that just warms my heart.  Many SNOTEL sites, especially in Utah, are reporting a snowpack SWE of 175% of average or greater.  Even on the Mogollon Rim near Flagstaff the snowpack is quite healthy.  The only sites with less than 90% of average snowpack are in the Gila National Forest. 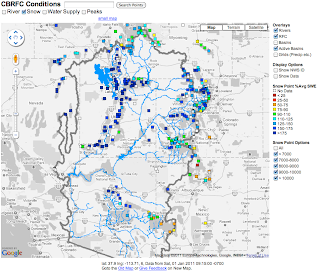 Wasatch skiers know this has been a great snow year thus far, but how great?  I took a quick look this morning at the historical Snowbird SNOTEL data available from the Colorado Basin River Forecast Center website.  Thanks to our most recent storm cycle, it does appear we have the healthiest 31 December snowpack (based on SWE) at Snowbird since the 1990 water year (when data availability begins).  Below you can compare this year (green) to two other early season snow years of note.  The first is water year 2005 (red), which started with an incredible bang in late October, and the second is water year 1995 (cyan), which was a huge year for snow in November (if I recall correctly, Alta had more than 200" in November of that water year). 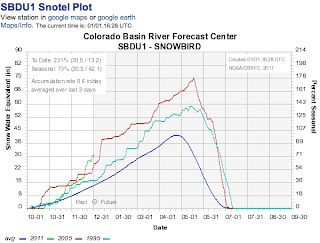 Uber-competitive folks out there might notice that we will fall behind 2005 if we don't get a major storm in the next week or two.  2005 was a water year characterized by a few very large storm cycles, and during that water year there was a really big one in early January (note how the SWE line is oriented vertically).  In contrast, 1995 saw lots of regularly spaced modest-sized storms, so the SWE line has a more regular sawtooth structure.  I suspect the 1995 water year was a better ski season than 2005, even if the total snowfall wasn't as large.  Once you have a healthy snowpack, you want frequent storms of modest size for a great ski season.

Of course, we are only looking back to 1990.  There are other big years before that date, including a couple monsters in the early 1980s.   Nevertheless, skiers should consider themselves fortunate, at least with the ski season so far.  Let's hope it continues.
By Jim S Posted at 1/01/2011 10:05:00 AM