Post-Election Smog Settles in over the Salt Lake Valley

A seriously nasty post-election smog episode has settled in over the Salt Lake Valley today.  Visually, it basically looks like crap.  Here are a couple of more photos of Downtown and the Wasatch Range from the Bonneville Shoreline Trail. 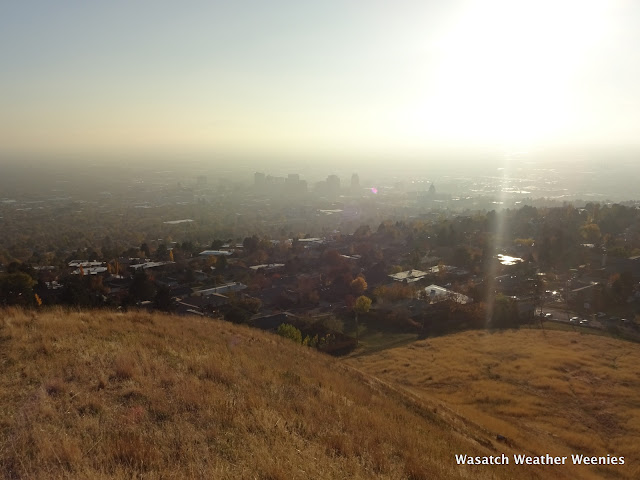 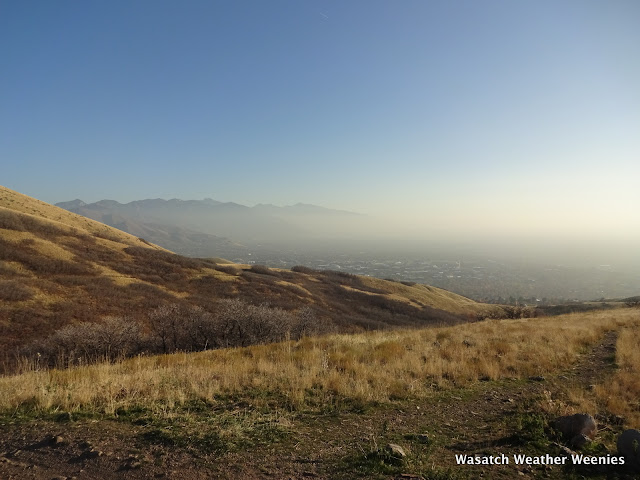 The setup for this event is important for two reasons.  First, we did not have a previous surge of low-level cold air prior to the development of the high-amplitude ridge over the past few days.  Second, there is no snow cover.  As a result, the cold pool that is present over the Great Salt Lake Basin is relatively weak.  In fact, yesterday's high at the Salt Lake City airport was a remarkable 69ºF and some sites in the valley peaked above 70ºF.

OK, so perhaps the air quality won't be that bad, right?  Wrong!  There are two flies in the ointment making our lives miserable.  The first is that we continue to burn fossil fuels and pollute the valley atmosphere.  That has changed little.  If we took that out of the equation, I wouldn't be writing this blog post.

The second is the Great Salt Lake.  The Great Salt Lake is quite cold at the moment compared to the overlying airmass.  There is a buoy operating on the lake about 6 miles west of Antelope Island and you can see how the lake has steadily cooled over the past month.  Temperatures near the surface spike each day, currently reaching about 58ºF, but below the surface hover around 55ºF.

Therefore, temperatures over and around the lake are lower, the cold pool stronger, and the mixing more limited.

The stable layer of air over the lake is having a major impact on temperatures and pollution.  This impact was especially pronounced yesterday afternoon.  For example, at the Neil Armstrong Academy in the West Valley temperatures briefly spiked to just over 70ºF at about 1 PM.  What a wonderful moment that was as the pollution mixed out and briefly dropped to only 3 ug/mg (compare top and bottom graphs near the center.  Shortly thereafter, the temperature dropped abruptly 10ºF and the PM2.5 rose rapidly again.  The temperature drop and pollution spike were both associated with the passage of the lake-breeze front. 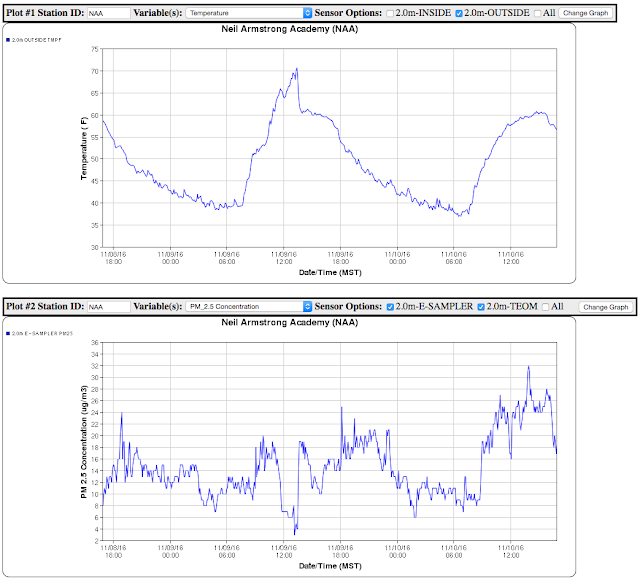 Today, the situation is a bit different.  Temperature have topped out at 60ºF (right hand side of top graph above).  It has stayed cool because the low-level flow has been out of the northwest and from the lake for most of the day.  In fact, the wind became consistently out of the west or northwest beginning at about 9 am (top graph below) and shortly thereafter the PM2.5 rose rapidly to 18 ug/m3 (PM2.5 presented above and below).  It subsequently rose further, spiking at 32 ug/m3. 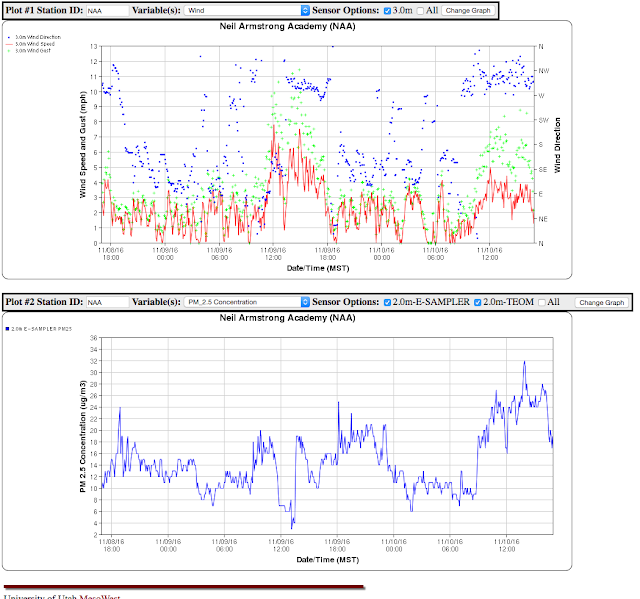 Meanwhile at the University of Utah the evolution of PM2.5 has been quite extreme.  Overnight last night, the air was very clean, but with the onset of upslope northwesterly flow today and the eventual penetration of more stable, polluted air from the Great Salt Lake and downtown, PM2.5 levels rose to more than 25 ug/m3 this afternoon.

Finally, I'll note that this is an event in which the top of the pollution is not especially sharp, but poorly defined.  In the photos above, for example, its difficult to tell if one is in or above the pollution.  There is a top to it somewhere, but it's less sharp than we sometimes see since the capping stable layer is relatively weak.
By Jim S Posted at 11/10/2016 05:04:00 PM