Deep Pollution Is Better Than Shallow

With only scant snow available at higher elevations, about the only thing one can do is take advantage of the nice mountain weather for a little hiking or mountain biking.  Yesterday, my son and I climbed Mt. Olympus, which I haven't done in many years.  I had forgotten what a ruthless climb that is and this morning I'm reminded that I'm no spring chicken anymore. 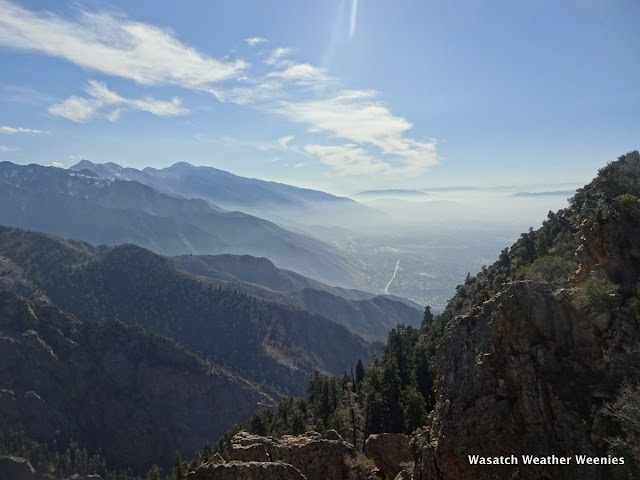 The deeper pollution is actually good news for city dwellers since it means we are mixing our emissions through a deeper layer, which leads to lower near-valley-floor concentrations.  On the other hand, if you wish to escape the pollution entirely, you need to go higher.  Further, the boundary between the polluted and clean air wasn't sharply defined yesterday.  During both the ascent and descent, I found it difficult to determine when we were in it or out of it.  You see some evidence in the photo above of pollution transport up the western face of the Wasatch and perhaps this made the pollution gradient on Mt. Olympus somewhat ill defined.

In terms of concentrations on the valley floor, the University of Utah observing site at Neil Armstrong Academy in the West Valley showed a steady long-term increase over the past four days with a peak late yesterday near 35 ug/m3.

That rate of rise is somewhat lower than I would expect in a mid-winter, snow-covered inversion event and a likely consequence of the fact that we're able to get somewhat deeper mixing in this event.  In addition, we've seen a drop in concentrations over the past 12 hours or so, so I suspect that overall today will be better than yesterday, although I wonder if we'll see pollution concentrations bump up with the airmass from over the Great Salt Lake pushes through the valley.

Gird yourself for a long continuation of this weather pattern.  Pity we're back on standard time as the evening mountain bikes were fun.
By Jim S Posted at 11/06/2016 10:47:00 AM