If you are dreaming of a white Thanksgiving you may be in luck.

Regional satellite, radar, and 700-mb temperatures over the past 18 hours show the landfall of a Pacific frontal system along the northern California coast followed by its redevelopment over north-central Nevada.

That frontal system has its sights set on the Wasatch Front for later today.  The latest HRRR shows the surface cold front pushing through the Salt Lake Valley around 2300 UTC (4 PM MST) this afternoon, with a band of frontal precipitation in its wake for much of the Wasatch Front.

Snow levels will drop quickly after frontal passage to bench and eventually valley levels.  This looks to be a quick hitting event, but 1-3 inches on cold surfaces along the east bench of the Salt Lake Valley seems like a good possibility.  Valley accumulations will be less, but perhaps enough to whiten cold surfaces.

The HRRR (above) generates lake-effect in the wake of the front, but one needs to be cautious interpreting that forecast.  First, lake geometry uses by the HRRR is based on 2001 data, leading to a Great Salt Lake that is much larger than it is at present.  U graduate student Brian Blaylock send me the image below showing the HRRR surface temperatures (degrees Kelvin) and you can clearly see the massive area of the HRRR Great Salt Lake compared to a more recent lake-shoreline outline (black line).  This means that the reliability of HRRR lake-effect forecasts will likely be low.  Of course, this doesn't mean we won't get lake effect tonight.  It is a modest possibility, although the odds of an intense, long-lived band are low (but not zero).  If you get some, consider yourself fortunate. 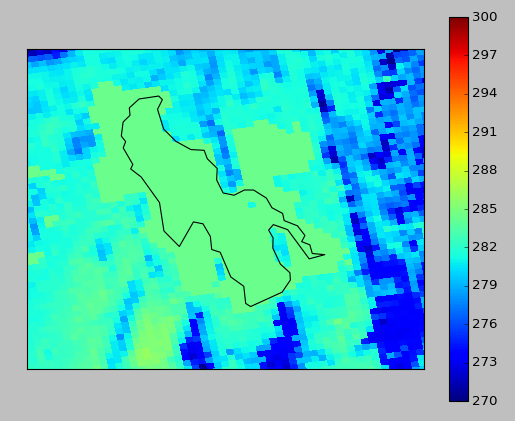 Temperatures during the frontal passage are favorable for relatively low density snow up in the mountains.  The 1200 UTC NAM generates 0.44" of water for Alta-Collins.  Overnight NCAR ensemble forecasts have 9 members between about 0.3 and .75 inches of water, and one less optimistic member going for just 0.1". 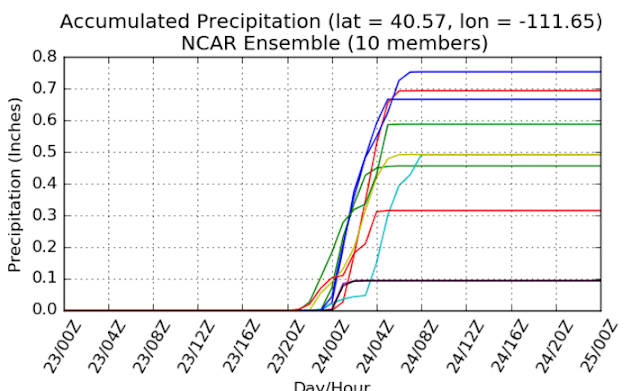 Based on that range of water equivalents, I would normally lean for 5-10" of snow, but the environment tonight looks favorable for lower density snow, perhaps with 5-6% water content.  That would mean something like 6-15" of snow if we ignore the less optimistic NCAR ensemble member (and I really want to do that).   Fifteen seems like a lot, however, unless the post-frontal and lake-effect precipitation really gets going.  I think something in the range of 6-12" is more likely and will stick with that and hope for more.
By Jim S Posted at 11/23/2016 09:27:00 AM