I guess we can call today the unofficial last day of summer.  I was going to put summer in quotes, but it is not as ridiculous as it sounds.

This morning's sounding had a 700-mb temperature of 6.8ºC, which represents the average for mid September, technically not meteorological summer, but within astronomical summer.

It should be noted, however, that there have been higher 700-mb temperatures observed at the airport in November, including 8.7ºC on Nov 19 (LST).  Model forecasts for later this afternoon top out at 7.6ºC (NAM) and 6.9ºC, so we're not in completely rarified air yet.

Nevertheless, the day is going to be splendid, with the maximum temperature constrained only by how much we mix out the strong valley inversion that was present this morning (see above).  At 11 am, we were at 63ºF at the airport and 65ºF at the University of Utah.  Bench locations will likely eclipse 70ºF today.  The maximum at the airport is, however, quite tricky to forecast as much depend on whether or not the southerlies can scour out the cold air along the valley floor and keep the lake breeze at bay.

At 11:28, the strong influence of the Great Salt Lake was apparent.  Over the northern Tooele Valley, where the lake breeze was in f ull force, temperatures were only in the 50s, compared to the 60s near Tooele and 64 at Stockton.  Over the Salt Lake Valley, the lake influence on temperature is weaker, but light northerly flow was evident near the Kennecott Tailings pile. 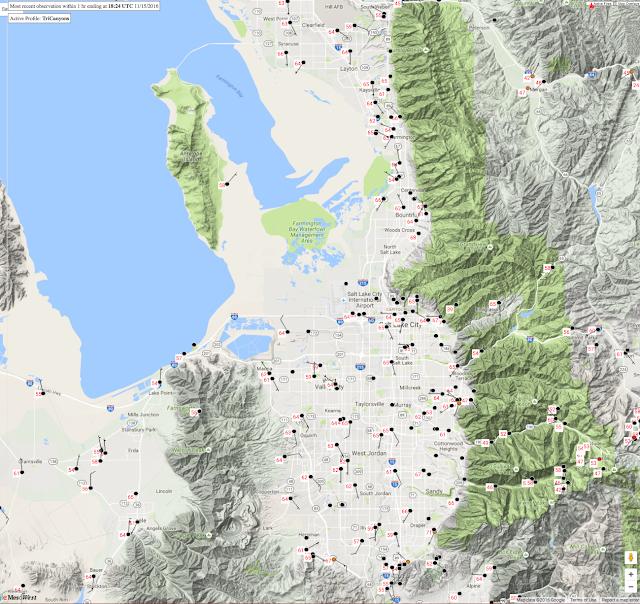 Given that we got to 70 yesterday, and the southerly flow is stronger today, I'm going to live dangerously and say we will break the daily record today with a high of 71ºF.  If the southerlies really get going, it could get quite a bit warmer than that, but I think it will be difficult for the cold air to completely mix out.  Note that the lake breeze could usher in some cooler air, especially near the airport, later today.

Getting to the important stuff, the models have converged on a solution similar to that advertised by the ECMWF and NAM yesterday.  As such, it is likely that the cold front will push into the Salt Lake Valley tomorrow afternoon, probably after 2 PM.  Right now, the models call for a dry frontal passage, with precipitation moving in during the evening when snow levels will drop rapidly, falling to near the valley floor by 9 PM or so.  By Thursday morning, expect temperatures in the low 30s.

Snow?  Yes, I think everybody will see some and I expect snow on cold surfaces when I awake Thursday morning.  Amount forecasts remain dicey.  The models typically are best for precipitation generated by cold fronts and it looks like an inch or two is possible on the benches from that.  Where things get dicey is following the frontal passage and whether or not the post-frontal environment will be sufficiently unstable to get going with or without assistance from the lake.  We'll take a look at that tomorrow, although you should expect continued hand waving.

For the mountains, I've consistently said that there are a wide range of possibilities and I remain uncertain about the size of this storm except to note that the odds of a major dump in excess of 18" are lower today than yesterday (but not zero).  Water equivalents being produced by the models today are fairly paltry, but low snow density may help generate larger snowfall accumulations.  My take is that 5-10" is probably the most likely range for Alta, but I would not be surprised if we came in below or above that range.
By Jim S Posted at 11/15/2016 11:52:00 AM