Thursday Will Bring a Shock to the System

It has been a remarkable fall across the entire Northern Hemisphere.  The large-scale upper-level pattern has been totally locked in.  As shown by the mean (left hand side) and departure from average (a.k.a. anomaly, right hand side) 500-mb analyses below, the pattern has featured anomalous troughing over the northeast Pacific, ridging over North America, and ridging over the North Atlantic and Arctic.

This weekend, I watched some of the World Cup skiing races from Levi, Finland and it was like viewing another planet as it sure looked like winter there, whereas here in Utah I threw on shorts and a t-shirt to mountain bike.

In fact, the past month (13 October - 13 November) rates as the 2nd warmest on record at the Salt Lake City International Airport, with an average temperature of 55.6ºF.  Just 0.1ºF ahead of it is the comparable period from 1927.

However, dramatic and abrupt change is coming.  The GFS 500-mb and 6-h accumulated precipitation forecast below shows a deep upper-level trough centered over Utah at 1800 UTC (1100 MST) Thursday.  WHOOPIE!!! 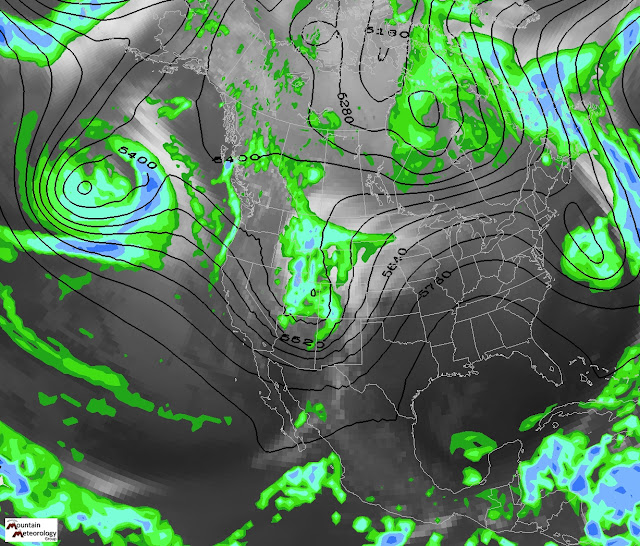 The transition from Tuesday through Thursday is going to be enormous.  The GFS calls for a 35ºF temperature swing at 11,000 feet.

Basically, we are looking at a transition from temperatures that may reach 70ºF at the airport tomorrow (Tuesday) to snow on the valley floor possibly as early as Wednesday night and Thursday.

In either event, Thursday is going to bring a shock to the system.  Given the spread in forecasts, it's too soon to discuss with any confidence the details of how this storm will evolve, but prudence dictates that you take care of your car and commute winterization needs by Wednesday afternoon.

Should you get the skis waxed?  Well, I still see a wide range of outcomes given the diversity of model forecasts in the various ensembles, with perhaps a storm total of 6 inches being on the low end of possibilities and something like 30" at the high end if everything were to come together wonderfully.

We've made some changes to this algorithm over the summer and it's not as "jacked up" as it has been in the past.  My take, however, is that if one were to add the European ensemble to the mix, these numbers would shift downward a bit.  Keep expectations low and hope for the bigger solutions to verify.
By Jim S Posted at 11/14/2016 09:21:00 AM