October Was Warm and the Pattern Ain't Changing

Although it wasn't a record breaker, October was exceptionally warm at the Salt Lake City International Airport, with an average temperature of 58.3ºF placing it in fourth place in the historical record.
Precipitation came in at 0.9", a bit below average, but not exceptionally so.  Average is somewhat meaningless in October anyway as the month features tremendous year-to-year variability, as exhibited in the graph below.

In the mountains, at the Snowbird SNOTEL site, precipitation for the month (black line) tracked fairly close to average.  At this elevation (9640 feet), October is a transition month in which some years a lot of precipitation is retained in the snowpack at the end of the month, whereas in other years very little is retained.  This year falls into the latter category, and that pretty much applies throughout the Wasatch Range.

A lack of snow at the end of October is no reason for skiers to panic.  From a snow safety perspective, it might be viewed as a good thing since thin early snow often becomes weak snow as it facets during dry spells.

On the other hand, the forecasts for the next 7–10 days aren't very optimistic.  The large-scale pattern is dominated by long-wave ridging.  A few weak troughs emerge from the Pacific jet and push through or close off over the western U.S., but none of these provide much to get excited about.  An example of this type of evolution, which is characteristic of the models and ensemble members is provided below by the 162-hour GFS forecast valid 5 PM MST next Monday.  On the large scale, a huge ridge predominates over western North America.  An elongated trough is moving through the western United States, but it is strongly deformed and weak.

Every now and then a weak trough or closed low can be an effective snow producer locally, but for the most part, there's not much to get excited about in the medium-range forecasts.  The 7-day NAEFS forecast ensemble shows a bit of something today and then a weak system or two over the next 7 days, but not much to get excited about.  We can always hope that an outlier wet member comes through, or that Mother Nature brings in a stronger system (this can't be ruled out), but for the moment, the forecast models aren't very optimistic.

The pattern is also quite warm.  Although I don't have access to a plume of temperature forecasts, the GFS forecast for Mt. Baldy (11,000 feet) is sufficient to make this point.  Temperatures remain at or above 20ºF and for a large portion of the period above 30ºF.

Thus, even snowmaking at the resorts will be difficult or limited.

The monthly outlook for November issued by CPC is also dismal, calling for strongly-stacked odds of above average temperatures and weakly stacked odds of below average precipitation.  I'm inclined not to panic over that forecast as in part it reflects the high likelihood of above average temperature and below average precipitation for the first part of the month (making it more difficult to tip the scale back in the other direction) and forecast skill degrades quickly after 10 days.  Plus, one or two good storms can make November.  Thus, keep your expectations low for the next week or two and hope that things improve mid month.

The 9th annual Utah Snow and Avalanche Workshop (USAW) is this Saturday at the Southtowne Expo Center.  Info below (click to enlarge).  Full-day and afternoon tickets are available, with prices going up after tomorrow.  Historically, the morning session was professionals only, but I believe it is now open to all.  I've been at several over the years and they are a good way to sober up about avalanche risk and sharpen up your decision-making skills before the season. 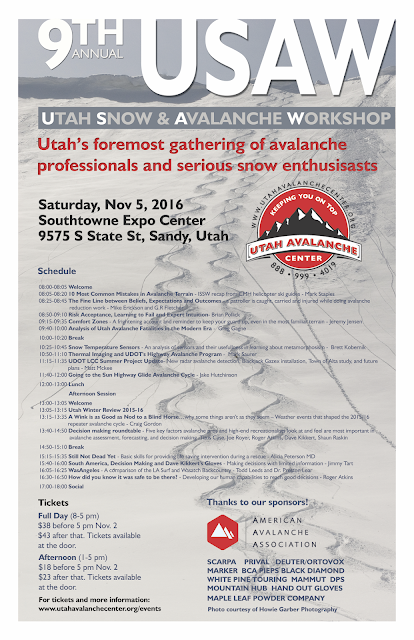