The GFS predicts another great example of downstream development in the next week, with ramifications not just for North America, but our friends east of the "pond" as well.

The 78-h forecast from the 0600 UTC 01 Nov GFS shows a high-amplitude ridge building over western North America, with a trough deepening over the eastern half of the continent.

Subsequently, a high-amplitude ridge forms downstream of the upper-level trough, leading to a Rex Block over the North Atlantic.

A full loop of the downstream development is available here.
In class we have been discussing Rossby waves, but concentrating on phase speed, which is the speed of individual troughs and ridges.  Because the Rossby wave phase speed is, however, a function of wavelength, Rossby waves are also dispersive and thus Rossby wave packets can propagate with a group velocity that is much faster than that of the individual waves.  This results in what synopticians often refer to as downstream development.
Time-Longitude plots (also known as Hovmoller diagrams) are typically used to examine wave packets. Below is a Time-Longitude plot of the mean meridional wind between 30 and 60 N during them month of October. 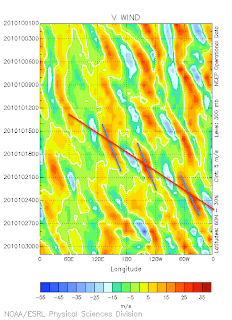 Recall that strong southerly flow (red color fill) occurs downstream of a mid-latitude trough.  Thus, the motion of individual troughs follows the maximum in mean meridional wind, or the red streaks.  I've identified three such maxima with red lines.  The motion of the wave packet, however, is much faster.  Note how connect a series of these maxima (red line).  What this represents is the successive downstream amplification of an upper-level trough as the wave packet moves downstream.  Tracking these wave-packets can be useful for forecasting as high-impact weather often accompanies their leading edge.
For more discussion of this issue, see Edmund Cheng's web site.
By Jim S Posted at 11/01/2010 09:50:00 AM