If all has gone well, balloons have been launched from the north and east side sites.  At nominal launch time (0000 UTC), the back edge of the frontal precipitation band was just about to move over Antelope Island.  Radar reflectivities were fairly low and at the University of Utah light drizzle with the occasional flake was falling.  Some isolated reflectivity cells formed in the NW flow over the southern half of the lake just prior to 0000 UTC, raising my eyebrow for a moment, but they appear to be weakening and are not an indicator of the lake getting going. 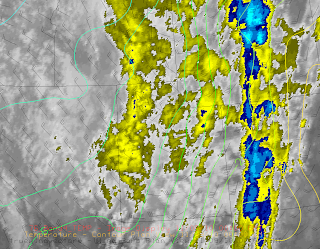 The frontal trough slopes rearward from this level over the lake, so I suspect we will se a fairly pronounced stable layer near 600 or 500 mb in the 0000 UTC soundings.  Looking forward to seeing what happens overnight.  The 1800 UTC NAM and U of U WRF were "bullish" on the possibility of lake effect.  The WRF forecast valid 0900 UTC is below. 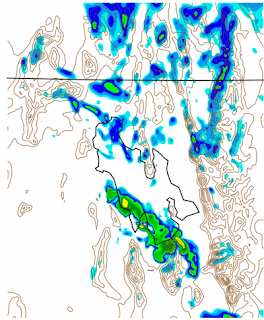