A fascinating night last night with regards to minimum temperatures.  I figured we we were primed to get into the negative numbers at KSLC when it was 10F at 9 PM last night, but alas, it wasn't to be.  Instead, temperatures declined little, with 6F being the lowest temperature reported thus far in the 5-min obs. 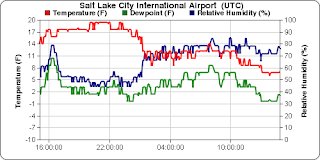 In fact, nearly all of the Salt Lake Valley is in the positive numbers this morning, as is the northern Wasatch Front.  If you want cold, -17 at Pony Express Marker and -15 in Logan seem to be the big winners at valley locations (note that these are not official lows, which may fall between observation times). 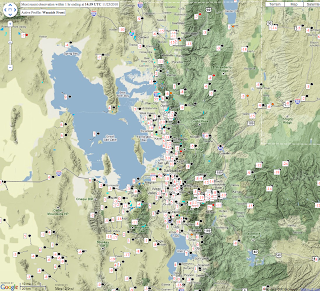 Some of the minimum temperature variability is due to topography.  For example, it gets very cold at the Pony Express Marker and at Logan because they are in isolated basins.  In contrast, slope-valley flows persist all night long in the Salt Lake and Tooele Valleys, providing a mechanism for turbulence and mixing that weakens the intensity of the nocturnal inversion.

On the otherhand, most of the Tooele Valley was much colder than the Salt Lake Valley last night.  I suspect the urban heat island is contributing here and that the signal is quite large today given how cold it is and the fact that there is a modest amount of new snow on the ground, which means there is alot of patchiness in the city, but you have full coverage in rural areas (note also that the warmest location in the Tooele Valley last night was the city of Tooele).