Oh what a night

It was a remarkable night last night with "flat line" temperature conditions persisting at KSLC all night long.  Check out the meteogram, which shows temperatures nearly dropped only a few degrees in the late afternoon and evening and then remained remarkably steady all night long with a lowest 5-min observation of 54 F. 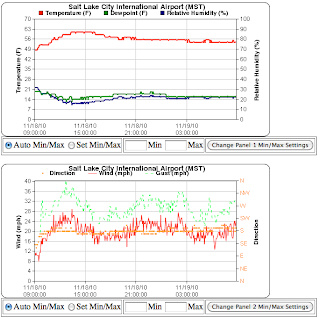 The combination of a thick cirrostratus deck combined with strong winds (sustained at > 15 mph for nearly the entire night) appears to have prevented the formation of any significant surface-based cold pool.  Even still, you don't see too many nights where there isn't a brief lull in the winds to enable a quick trop in temperature of a few degrees.
By Jim S Posted at 11/19/2010 09:07:00 AM