If you don't have a tingle in your stomach today, you picked the wrong profession.  This is going to be a big storm in terms of precipitation and I'm intrigued about the prospects of lake-effect tonight.

The 1200 UTC NAM has arrived and forecasts modest (5-10 m/s) NW flow with even a hint of cyclonic curvature over the lake at 12Z tomorrow morning.  With a 700-mb temperature of -10C and an antecedent lake-surface temperature of ~12C, I don't think you can draw it up any better than that at 700 mb.

On the otherhand, the tongue of coldest air at 500 mb remains just upstream at 12Z and the lowest temperatures are only about -25C. 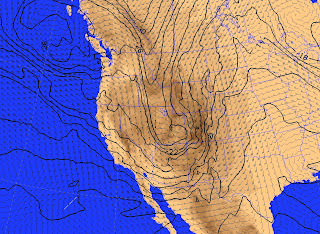 As a result, the instability tomorrow morning is not especially deep, as can be seen in the NAM sounding which includes a stable layer just below 600 mb.