The cold front is just upstream of Hat Island and we can now get a pretty good look at its strength in terms of the airmass change and post-frontal winds.  The MesoWest analysis shows a 16F temperature contrast between Hat and Gunnison Islands. 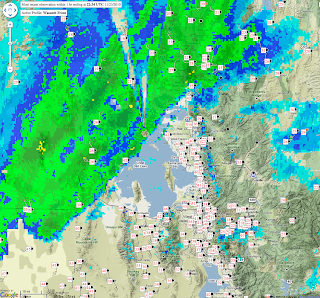 The temperature at Gunnison Island dropped from about 43F to 28F with frontal passage, which was accompanied by a 55 mph wind gust.  Post frontal winds, however, have subsided to about 25 mph sustained with gusts to just over 35. 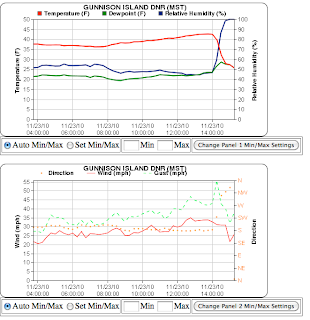 It's a bit nastier along I-80 in the West Desert.  DPG17 warmed to 48F and then observed an abrupt temperature drop to 28F with fropa.  Impressive!  Post-frontal winds are sustained 40 mph with gusts to over 45.  This is blizzard strength for sure and it must be a mess and really lonely out there on I-80.  I suspect the surge to 48F may have been fueled a bit by a clear slot that was evident in the satellite earlier this afternoon (mentioned at weather discussion). 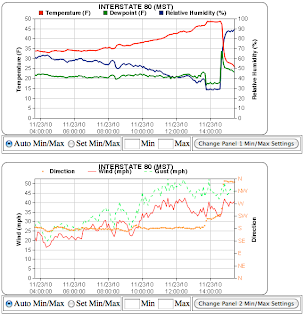