The most anticipated winter storm in many years is on our doorstep and let's hope it doesn't disappoint.  Right now we have the "calm before the storm" so to speak, with a south wind and temperatures in the mid 30's over the Salt Lake Valley.  However, the 1430 UTC MesoWest analysis shows surface temperatures in the teens and single digits across east-central Oregon - a harbinger of things to come. 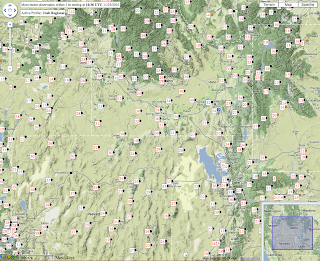 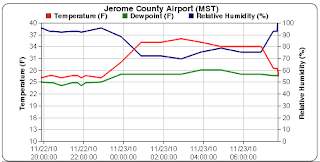 At present, the front has not yet strongly contracted as the initial temperature fall at KJER was only about 7F.  However, the 700-mb analysis shows a 14C temperature contrast from southeast Idaho to the Columbia basin with a temperature minimum below -24C, so there is broad post-frontal baroclinity in place. 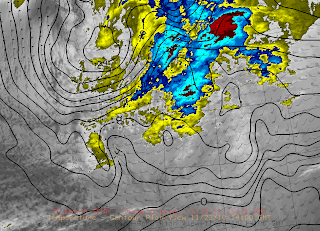 The surface front appears to undergo scale contraction in the 12Z NAM and passes through KSLC between 5 and 8 PM tonight.  Weather conditions should be miserable during and following frontal passage when wind and turbulence should blow snow into every crevice and orifice.  The National Weather Service has issued a rare blizzard warning covering all of northern and southwest Utah.  Go home early.

NAM 700-mb temperatures plunge to -25C at KSLC by tomorrow morning.  Since 1956, this is uncharted territory for November.  We have a very good chance of breaking the all-time lowest maximum temperature at KSLC tomorrow.  Lake effect?  Likely, but we'll deal with that in a future post.
By Jim S Posted at 11/23/2010 08:10:00 AM