Fall haze is upon us

We have officially crossed the meteorological brink from summer into fall. There is insufficient solar heating this week to build a convective boundary layer (CBL) that extends to crest level (~700 mb). The sounding from Tuesday afternoon shows a nicely developed CBL, but it tops out at about 775 mb.

CBL development yesterday was even more pathetic as slight warming above the surface kept it capped off at just above 850 mb. 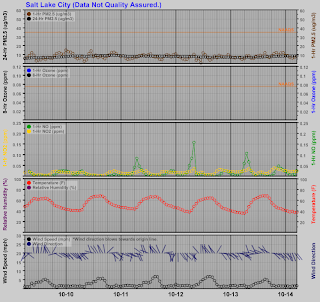 Nevertheless, as a caveman would put it, we are moving quickly from "ridge good" to "ridge bad" territory.  What's unfortunate is that we could use some storms now for SOLPEX and some ridging in December for PCAPS.  On the otherhand, as discussed in an earlier post,  a dry October is good for skiers.
By Jim S Posted at 10/14/2010 08:13:00 AM