Hopefully the 1800 UTC soundings are off.  I've heard from the northend team and they report a remarkably deep layer of southeasterly low-level flow.  More on this in a few paragraphs. 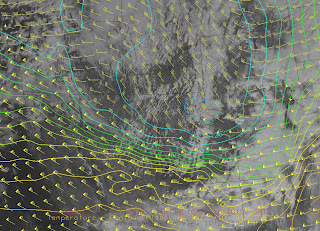 The flow at the surface is more zonal with westerly flow reported at many stations, including Gunnison Island and Hat Island.  This flow clearly decelerates as it approaches the northern Wasatch Mountains, with some evidence of perhaps some southward deflection.  The flow on Promontory Point, commonly used by yours truly as an approximate steering layer flow for lake-effect, is NWerly.  Further north at Locamotive Springs, winds are quite light and out of the north.  Given the reports of SE flow by the northside team at Kelton, this suggests perhaps some sort of anticyclonic gyre in the wake of the Raft River Range. 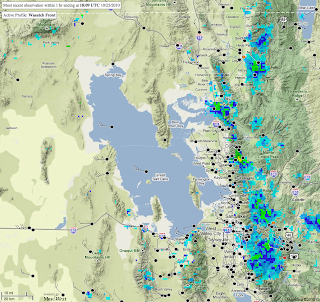 Over the past two hours, persistent orographic precipitation has fallen over the mountains east of Logan and over the upper Cottonwood canyons.  An intense wind-parallel band formed downstream of the SE corner of the lake around 1622 UTC, then weakened and broadened, before dissipating.  Whether or not this is lake-enhanced remains unclear.  A similar band materialized earlier but did not appear to be connected to the lake.  The coverage of radar returns appears to be diminishing presently.
By Jim S Posted at 10/25/2010 12:41:00 PM