Great mid-lake band last night.  One of the best I have seen in several years.

It's interesting to compare the last two nights and their contrasting lake-effect modes and intensity.  I'll concentrate on 1200 UTC for brevity.

At 1200 UTC 26 Oct, there was a dominant wind-parallel band near Bountiful (a.k.a. the Bountiful Band). Temperatures were in the high 30s over much of the lowland regions, including the northern Wasatch Front from Bountiful to Ogden.  Promontory Point was 29F with a WNW wind at 20 knots.  Westerly flow was observed at HAT and at many of the locations near Ogden. 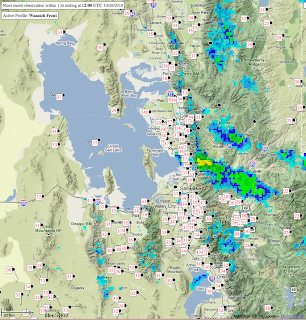 This morning, at 1200 UTC 27 Oct, there is a strong wind-parallel band near the major lake axis (a.k.a. the mid-lake band).  Temperatures in the Ogden area are in the low 30s.  Temperatures are also cooler over the Lakeside Mountains compared to the previous day.  Promontory Point is 26 F with a NW wind at 15 knots.  The flow pattern is remarkably similar to the previous day on the western side of the lake, but the flow in the Ogden area is primarily southerly. 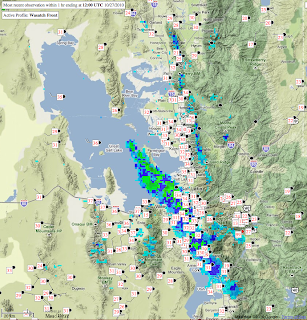 Consistent with the changes evident in the MesoWest data, comparison of the 1200 UTC 26 and 27 Oct soundings from KSLC (purple traces for the former) show 2-3C cooler conditions today below about 600 mb, which follows the the weak trough passage we observed last evening. 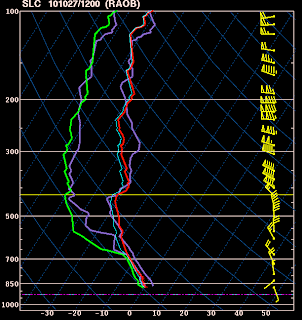