We are moving forward with the 0300 UTC sounding launches and keeping our fingers crossed that things continue to blossom over and downstream of the lake.

Over the past hour radar echoes have become more frequent and intense south and east of the Great Salt Lake, especially from the Bountiful-area mountains to the Cottonwood Canyons. 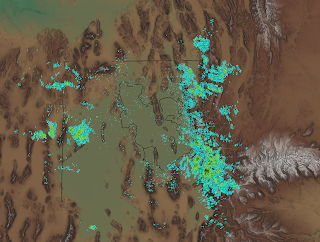 There has also been frequent cell development along a wind-parallel axis near the SE shore of the Great Salt Lake, not far from the east-shore launch site.  MesoWest analyses show a nice confluence zone in this region.  Compared to 2330 UTC the flow has weakened, veered (especially in the Ogden area), and temperatures have cooled more around the lake than at the Gunnison and Hat Island sites.  We now have a marginally positive lake-land temperature difference.  Hat and Gunnison are technically upstream of the lake, so this difference may be a bit underestimated. 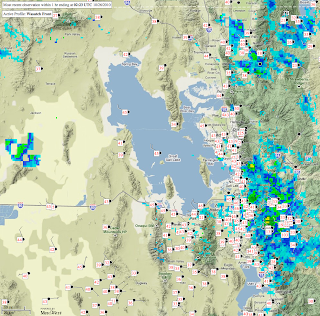 The 0000 UTC KSLC sounding is a bit disappointing.  With the cold-core aloft now downstream, mid-levels are a touch stable.  The sounding is also very dry above the surface layer, although dewpoints at sites in the Lakeside Mountains and on Promontory Point are higher than indicated at comparable altitudes in the sounding.

Further, GPS-based PW was a touch higher than indicated in the sounding and has increased some since. 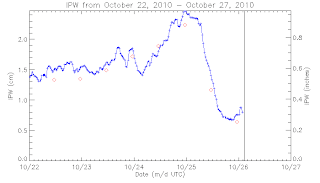 With our teams in place, all we can do now is hope that mother nature brings the goods and that the approaching short-wave ridge doesn't put too much of a damper on things.

A few stations in the Bountiful/Ogden area are reporting winds with a downslope/offshore component for the first time tonight. 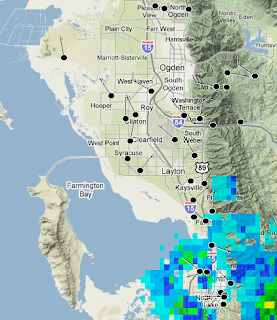 The 0300 and 0600 UTC soundings from the east shore could prove very interesting especially when compared to those earlier today.