Down the stretch they come

NCDC is reporting that the first nine months of 2010 are tied with 1998 as the warmest Jan-Sep period in the instrumented record.  Will 2010 be the warmest on record at years end? 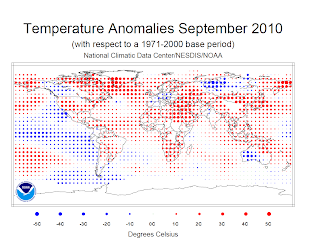 Some have argued that the Earth has been cooling since 1998, in part because the surface-temperature records maintained by the Climate Research Unit at the University of East Anglia (CRU) have 1998 as the warmest year on record.  Observational uncertainties and interannual variability, however, make year-to-year rankings quite misleading and invite cherry picking by people on both sides of the political debate.  This is the meteorological equivalent of the BCS rankings.

For an in-depth discussion of how all these temperature records are produced and what they mean, see Hansen et al. (2010).  Figure 10 offers a nice synopsis of the 12-month running mean temperature (rather than calendar-year averages) along with the ENSO Nino3.4 index. 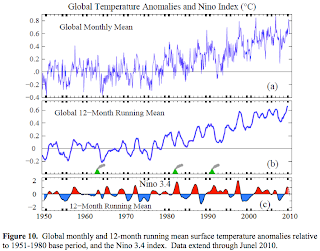