Sorry I'm running late on this blog update.  SOLPEX IOP1 has reached a conclusion.  Our final radiosonde launch was at 1500 UTC this morning, giving us a full diurnal cycle of sampling.  Amongst the highlights of the overnight period was a fairly persistent wind-parallel band that developed near Bountiful in an area that seems to be a magnet for such bands.


The so-called Bountiful Band persisted between 1100-1300 UTC, so our 1200 UTC launch from the east side site was perfectly placed and timed.  The 1200 UTC MesoWest analysis shows that we never really got a decent offshore flow going last night. 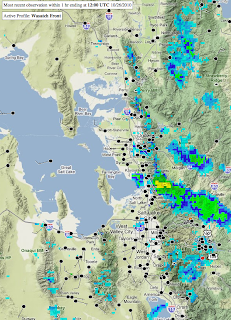 At times, the flow on the east side had a bit of a northerly component, as evident in the 0230 UTC update. At 1200 UTC, there was also light SE flow over the northern Salt Lake Valley.  Whether or not this was significant for the development of the Bountiful Band remains undetermined.

After 1500 UTC precipitation became increasingly scattered and less concentrated downstream of the lake, so our timing was good.  We may get more lake effect tonight, but will be sleeping happily in our beds.