The Collins observing site at Alta (CLN) is one of the most reliable remote mountain precipitation sites in North America, but not today.

Note how the snow depth has increased 5 inches since 2 am MDT, but no precipitation has been reported by the gauge. 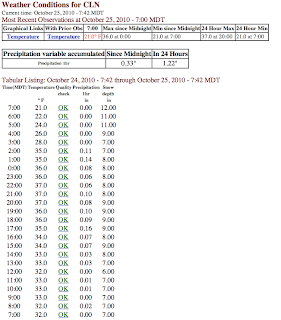 I suspect that the gauge bridged over with snow or clogged up during the intense precipitation that fell during fropa (in fact, that's when the gauge stopped reporting), or it was befallen by some other calamity.

Fropa was really impressive at my place.  Our bedrooms are on the north side of the house and our windows made quite a racket as they were pelted by rain and graupel.  Add in the thunder and lightning and you have the most exciting night of weather in several months.
By Jim S Posted at 10/25/2010 07:49:00 AM