There is an article by Choi et al. in this month's Journal of Climate examining changes in Northern Hemisphere snow cover from 1972/73 to 2007/08.

Using weekly snow-cover extent maps generated by NOAA and National Ice Center meteorologists (derived primarily from visible satellite imagery), they examine two measures of snow season: (1) the full snow season (FSS), which is the interval between the first appearance and last disappearance of snow cover and (2) the continuous snow season (CSS), which is the longest interval with an unbroken string of weeks with snow cover.

Curiously they find little hemispheric trend in CSS duration.  In other words, on a hemispheric scale, the period of continuous snow cover has changed little during the study period.  On the otherhand, they find that the FSS duration has decreased at a rate of about 5.3 days/decade.  This decrease is due primarily to an early offset (or end) of snow cover in the spring.  This trend is pronounced in the western United States. 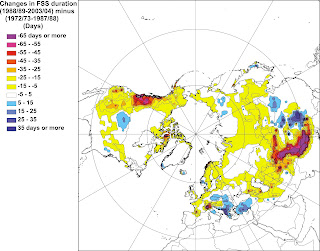 I find these results to be broadly consistent with prior literature on western US climate.  Warming trends in recent decades are more pronounced in the spring than the fall (perhaps due to the snow-ice albedo effect) and one would expect precipitation and snowfall from spring storms to be sensitive to warming since temperatures are likely near freezing.

Given the warts in snow-cover datasets, it will be interesting to see how this study is scrutinized in coming weeks.  Also at issue is trend attribution, which was not addressed by the authors.  At issue is whether or not the hemispheric and regional changes are due to global warming from greenhouse gasses, decadal-scale variability, or other factors (e.g., black carbon, dust).
By Jim S Posted at 10/13/2010 09:17:00 AM