As discussed in the September CPC ENSO diagnostics discussion, La Nina has strengthened and looks to be here through at least early 2011.  CPC analyses show a pronounced cold tongue with sea-surface temperature (SST) anomalies >1C extended across the eastern and central tropical Pacific as of early September.

Such a cold tongue is a hallmark of La Nina and typically results in decreased convection in the western and central tropical Pacific, with implications for western North America.  During La Nina years, the subtropical jet and southern storm track are typically less active, split flow is less common, and incursions of cold air into regions like the Pacific Northwest and the Great Plains may be more frequent or intense.  CPC composites show that the "dice are loaded" during La Nina for above average precipitation in the Pacific Northwest and below average in the Desert Southwest during DJF, with the latter having a much stronger frequency. 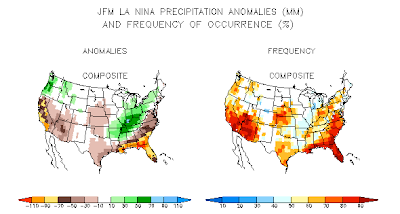 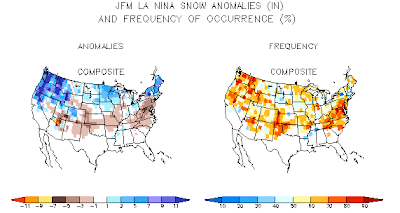 Northern Utah and the Wasatch Mountains sit on the "node" of the snow seasaw.  The snow dice in the Wasatch are perhaps only slightly loaded for an above average snow year, and not enough for me to stick my neck out on any predictions, although I'm hopeful.  This does, however, look like a good year to consider a trip to BC or the PacNW.
By Jim S Posted at 10/02/2010 08:24:00 AM